ALBUQUERQUE, N.M. – Albuquerque city councilors were expected to vote on whether or not to bring speeding vans to the metro — instead they are pushing it off to the next meeting.

It’s how the city wants to address it that has many people bumping heads, especially city councilors.

Implementing mobile speed vans in Albuquerque is something councilors have been going back and forth on for weeks. It was first brought to council in early September. The legislation called for the vans to be placed is needed areas around the city.

"Even though this is not going to be the solution to speeding in Albuquerque, I’m excited that this is going to be one step in a direction that we can try something new,” said Brook Bassan, city councilor.

The process is, if someone is speeding by the van, it snaps a photo of the license plate. An actual officer inspects the photos and the speeder could end up with a civil ticket in the mail, a $100 fine.

But the last city council meeting ended with a lot of unanswered questions.

“I want to know how are we actually going to enforce this,” said Trudy Jones, city councilor.

“I believe if you have a speeding problem, you need to have a police officer involved in that process in order to intervene. The whole point is to change someone’s behavior, getting a notice in the mail and paying a check three or four weeks later doesn’t do anything for that. It just makes you mad,” said Pat Davis, city councilor.

And where will the money go?

City officials referenced a similar program in Santa Fe where the breakdown of their $50 ticket is: $25 to the state, $5 to the city and $20 dollars to the third party.

“We all know that speeding is a problem. But this is not the solution,” said Jose Martinez.

Jose Martinez started a, "Where’s the damn van?" Facebook page after the program was implemented in Rio Rancho.

“I did it mainly for friends and family to begin with you know, just to let them know where these speed vans were, so they wouldn’t get a ticket and as I started doing more research I found out there was more to it than just a speeding ticket,” said Martinez.

He said his money shouldn’t be leaving the state. For the City of Rio Rancho tickets, they’re directed to send those checks to Ohio.

“In my mind, I would much rather see a police presence that would stop this, instead of a camera that’s in a van,” said Martinez.

“We all know that speeding is a problem. But this is not the solution,” he said. 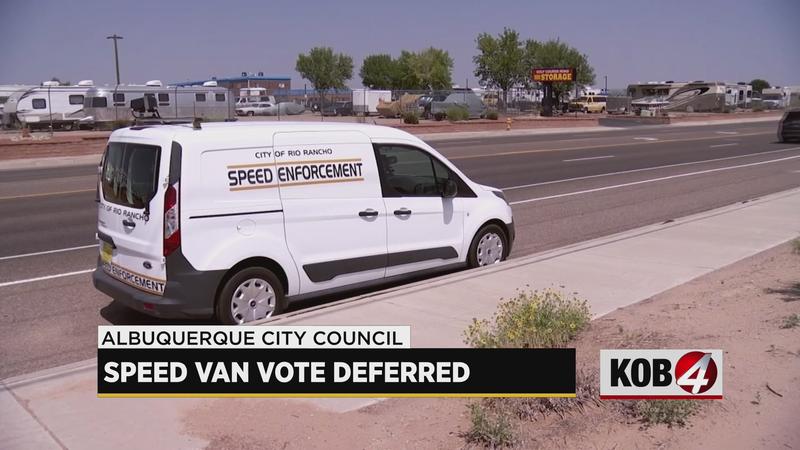