ALBUQUERQUE, N.M. — When an Albuquerque man suffered a medical emergency, family members of Gary Taylor said a first responder showed up to help—but not the kind you would expect.

Taylor’s family surprised Kristine Koziar at a Starbucks on Gibson to thank her for saving his life. Koziar, the store’s manager, happened to be at the right place at the right time.

In early March, Gary Taylor was driving an RV to get it fixed when he suffered a stroke.

“He must have known you know something was happening to him and he just parked the RV on the side of the road,” said Taylor’s wife Theresa Trujeque.

“As a type one diabetic, he’a always really in tune with his body, and so we can only imagine that he knew something was going on,” explained Taylor’s son, Larry Davis. “We assumed that he probably felt it with something with his diabetes. He pulled over to secure himself and others. That’s when he ended up staying there.” 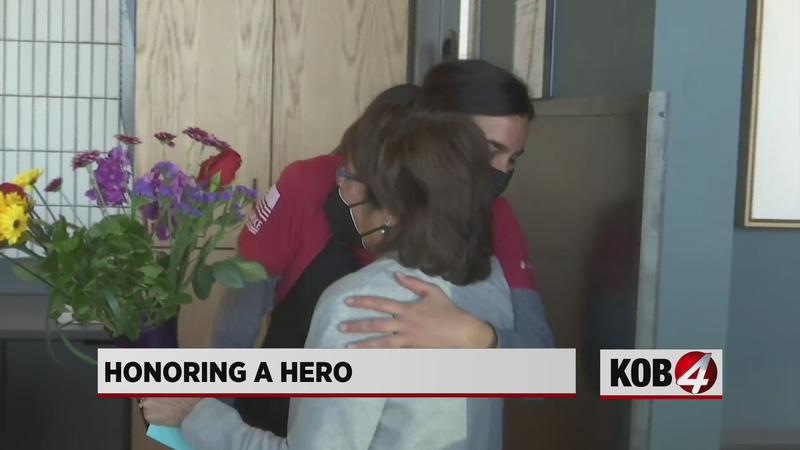 For hours, Taylor stayed there until somehow the RV started rolling down the Gibson Boulevard. The RV eventually hit a post near Starbucks.

“If he hadn’t crashed, he probably would’ve sat there until we came looking for him,” said Trujeque.

Koziar ran out to help, waited for the paramedics to arrive, and noticed he was diabetic.

“He reminded me a lot of my father,” described Koziar. “A little bit older, but same glasses, same hair, same stature of tall and thin, and I was just thinking I would never leave my dad."

Koziar even held onto Taylor’s RV keys and got in touch with his family.

“She’s a first responder in our mind, and she did the right thing. She had a choice. She could have just put her head down and kept working, but she chose to do the right thing, and because of that, we still have our dad,” said Taylor’s son.

Weeks later, the family received a card from Koziar.

“Kristine is, to me, you know, is just an angel,” said Trujeque.