ALBUQUERQUE, N.M. —Gov. Lujan Grisham announced last week that the state’s economy can fully reopen if 60 percent of the eligible population receives their COVID vaccine. However, state officials face the challenge of tracking New Mexicans who received their vaccine out-of-state.

Earlier this year, the KOB 4 Investigates Team followed some New Mexico resident who traveled to Texas to get their shots faster.

Now, state officials said they’re using a federal database to access the number of people who were vaccinated out-of-state.

“I think it’s possible part of the state going across either one of those two borders, the southern border to get their vaccine in Texas, it’s possible they may not be in the system or their data might not have percolated its way through,” said Dr. David Scrase, Cabinet Secretary for Health and Human Services Department.

But health officials said they’re working to determine what those out-of-state numbers are. 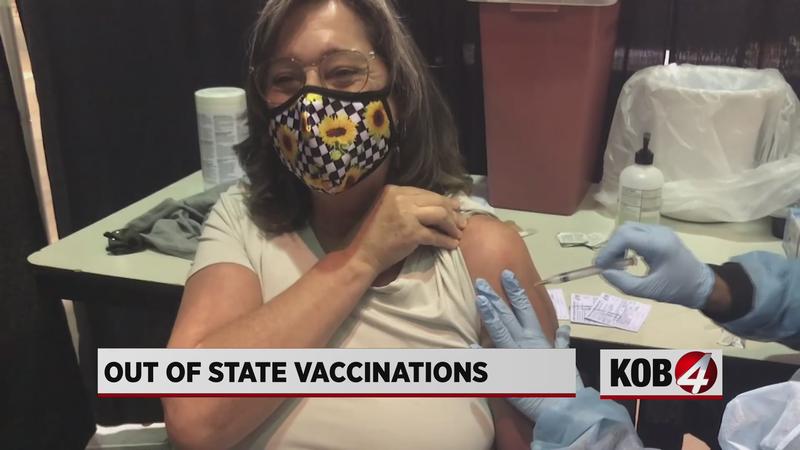 “We’ve worked with one partner in Texas and have requested that information regarding how many New Mexicans have received at least one dose in Texas, but have not received that response yet has been promised to us,” said Dr. Tracie Collins, secretary of the New Mexico Department of Health.

New Mexico health officials are encouraging people to update their state vaccine profile if they’ve received their vaccine in another state, so their vaccine will be counted toward the state’s reopening criteria.

“That’s a really easy way to bring county vaccinations up is to identify people who got vaccines elsewhere,” Dr Scrase added.

New Mexico does not have data on how many New Mexicans have received their vaccines out of state. However, Dr. Scrase said using the federal database, he believes that the number is in the single digit percentage.