ALBUQUERQUE, N.M. — State health officials are warning against a drug some people are using as a treatment for COVID-19, Ivermectin.

The drug, unapproved for any viral infection, is used to treat parasitic infections. Ivermectin can also be used topically to treat lice or rosacea, but it is also used in animals.

Local feed stores have noted an increase in people buying a version of Ivermectin meant for use as a dewormer for livestock, with customers telling employees that they intend to use it themselves.

Acting New Mexico Department of Health Secretary David Scrase said that is extremely dangerous – and there’s mixed messaging out there.

"I’m a huge proponent – under doctor’s order – to try whatever other alternative there is, whether it’s therapeutic, Ivermectin, I mean, anything, whatever people want to try through their doctor, I’m all for," Rep. Yvette Herrell said. "Because studies show some of these work for people, some don’t, but everyone should have access to what they’re comfortable with." 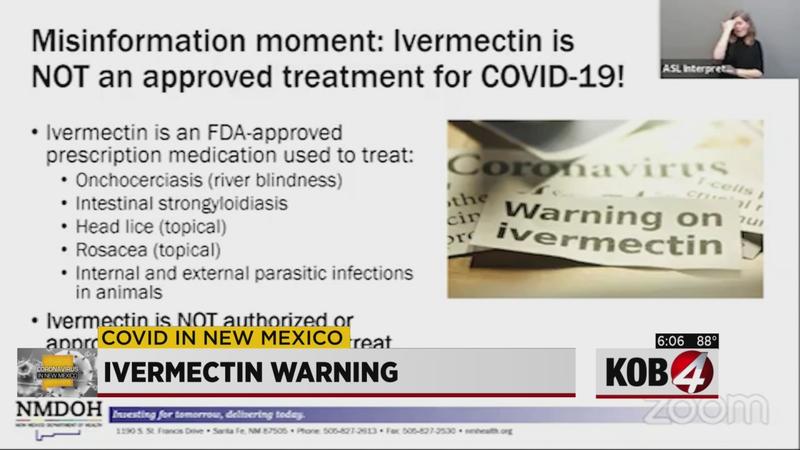 Herrell was one of several Republicans who sent a letter to Dr. Anthony Fauci asking about drugs like Ivermectin.

However, Scrase stressed during a COVID-19 update Wednesday that Ivermectin should not be an option. He said the medical advisory team has looked at it multiple times and there is no evidence that Ivermectin is an effective treatment for COVID-19.

"Some people I’ve been working with for the whole pandemic, who I highly value their opinions, have informed me they had a case in one of their hospitals die from taking Ivecmectin," Scrase said. "The belief is that Ivermectin was obtained from a veterinary supply store. I have no idea how one would go about dosing oneself with Ivermectin – other than making it really, really clear that one should not do that ever, no matter what. If you’re a human being and you can hear this press conference, don’t take it."

Scrase said they’re still waiting on an official cause of death.