ALBUQUERQUE, N.M.- The president of New Mexico State Police Association, Jose Carrasco, got the attention of lawmakers after expressing his frustration, in a video, with various pieces of legislation that’s been filed during the 2021 legislative session.

Carrasco is specifically concerned about House Bill 4 which would strip police of qualified immunity. He also expressed frustration with Senate Bill 227, which targets use of force policies, including policies on executing search warrants.

"You are creating a situation where deadly force is going to be used, however, it’s going to be the person using deadly force on officers who are just enforcing your laws, that you wrote, that your senators and representative wrote and passed," Carrasco said.

Senator Lopez responded to Carrasco’s statement by saying, "Police union leaders have to advocate solely on behalf of their members, while I as a senator have to weigh all the facts."

House Bill 4 is sponsored by Speaker of the House Brian Egolf. He met with Carrasco on Wednesday. 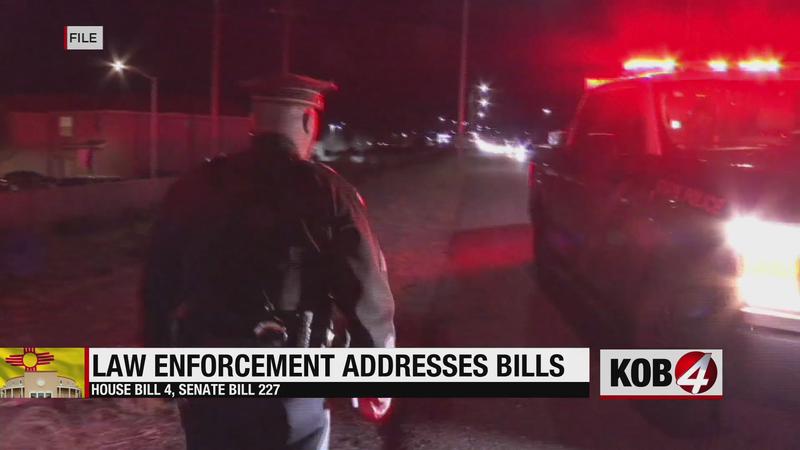 "He agreed that the changes I made in the bill address his concerns," Egolf said. "We had a very good, and honest and frank conversation, and we left in a very good place with him and me."

The committee substitute for that bill is on the House floor calendar. Speaker Egolf says public comment plays a big role in crafting legislation.

“For the past 18 years I’ve worked with the Law Enforcement Academy to focus on community policing rather than military policing. This bill is a logical continuation of these efforts. There is simply no reason for officers to use deadly force when it is not absolutely necessary and clear alternatives to deescalate a situation exist. Bad practices by bad actors have resulted in heartbreak and tragedy for so many in our communities, especially people of color, who are disproportionately the victims of police violence.

Police union leaders have to advocate solely on behalf of their members, while I as a senator have to weigh all the facts, including that the Albuquerque Police Department has been under federal oversight because APD had engaged in a “pattern and practice” of unconstitutional “use of force” and “deadly force” and found a “culture of aggression” within APD. A culture of aggression can only be eliminated by ensuring police training and policies reflect the mission of our law enforcement agency: protecting and serving the public. We have very good officers who are charged with serving and protecting the public and we must support them in every way possible, but that support does not mean abdicating oversight, accountability or responsibility for the use of excessive force.

By requiring the establishment of use-of-force policies and de-escalation protocols state-wide as standard operating procedure, we can get to the root of this problem and properly train our law enforcement community to handle situations in a way that will keep everyone safer.”

Full statement from Speaker of the House Brian Egolf:

"This afternoon, I invited Sergeant Carrasco to meet me tomorrow afternoon at the Capitol to discuss the New Mexico Civil Rights Act in its current form. After extensive revisions in the House Judiciary Committee yesterday, the bill addresses all of the concerns he discussed in his video, and I am glad to walk him through each modification made. Sergeant Carrasco informed me he plans to read the bill before our meeting tomorrow, and I look forward to a positive discussion.

Since my first day in the New Mexico Legislature, I have been a proud and sincere supporter of the women and men of law enforcement. As one of my first acts as Speaker, I created Law Enforcement Day at the Capitol to highlight the important service of law enforcement and have secured funding for training and retention bonuses. I was also proud to pass legislation that expanded life-saving tourniquet kits to every officer in New Mexico, which has saved the lives of officers and civilians alike."