ALBUQUERQUE, N.M. — A state senator from Albuquerque has come under fire for her recent comments about firefighters that were made during a committee meeting earlier this month.

The legislative committee was debating Senate Bill 90, which would’ve allowed the overtime of firefighters and law enforcement officers to be counted toward their state retirement pension. Firefighters currently work 46 hours a week, but their pension is calculated for 40 hours of work.

State Sen. Antoinette Sedillo Lopez (D-District 16), who is also running to replace Rep. Deb Haaland in Congress, characterized the work of firefighters like this:

“Some of this overtime is for eating and sleeping and just hanging out. The 216 hours for 28 days is not hardcore overtime, what you would expect overtime to be. So we would be giving the pension at one and a half times for six hours every pay period for time that is not working, that is actually sleeping and eating,” Sen. Sedillo-Lopez said.

Firefighters were quick to respond to the senator’s comments during the Feb. 3 meeting. 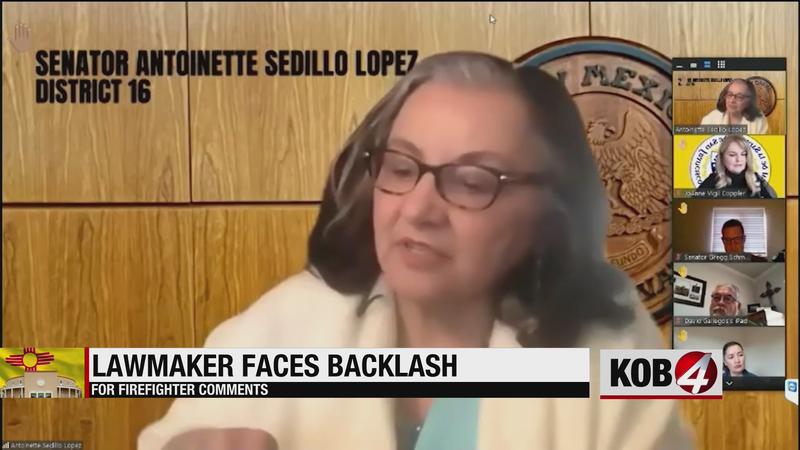 “I take exception to people who think our firefighters are just laying around. In the city of Albuquerque, we are on pace to hit 110,000 calls in one year. We are the busiest in the nation per capita, per firefighter,” said Justin Cheney, IAFF Local 244 Union President.

Despite the comments, Sen. Sedillo Lopez voted in favor of the bill, allowing it to clear the committee—but that didn’t stop people from speaking up on social media.

“She is clearly mis-informed [sic]. This is insulting. Especially after 2020 and all the front line care rendered to those suffering from COVID…turns my stomach,” wrote Karl Ehl, a Facebook user.

“Unfortunately the public may never truly understand what Firefighters do during a 48 hour shift. We do eat, most people do. Eating, sleeping, showering, using the restroom come with no guarantee in the firehouse. We drop everything we are doing to answer the call,” wrote another user.

KOB 4 reached out to Sen. Sedillo Lopez’s office, but did not hear back.