ALBUQUERQUE, N.M. – There are allegations of threats of violence against Black middle school students in Albuquerque. They say they’re scared to go back to class, that a student not only called them the n-word and other racial slurs, but threatened to come to school with a gun and shoot them.

KOB 4 spoke with parents today about what happened and a student who heard these racial slurs.

The mother asked that we don’t use her name but says she can’t believe this happened at a place where students are supposed to feel safe and supported. Now several parents tell KOB 4 with this threat of shooting targeting Black students, they don’t feel safe sending their children back to class.

It was during lunch at Jefferson Middle School in Albuquerque when the sixth grader says she and her three friends approached a new student, wanting him to feel welcome at the school and introduce themselves.

To say she and her friends were hurt by what the student said is an understatement.

"They are not looking at me for who I am, but they are looking at me by my skin tone and my friend’s skin tone. Like, it kinda makes me sad that people actually think that way," she said.

But what he said next, according to several at the school, scared her and several other Black students to their core.

"They said they were going to bring a gun to school and shoot all the Black people. I was really scared and a lot of my friends went home early whenever they heard about it or just didn’t come to school period. It was just scary in general."

“With the times, sadly it’s something we do experience and we do worry about for our children and school should be a safe haven for our students," said Roybal.

It spread throughout Jefferson. On Friday, several children called their parents and told them they didn’t feel safe, including the students of Tranette Martin and Charles Ashley III.

"My oldest called and said ‘hey there’s been a threat on the Black kids lives out here at the school,’" said Ashley. "I u-turned and picked them up from school," said Ashley.

Now these parents are demanding action be taken immediately.

"If there is no discipline as a reaction, it just starts to spread and grow," said Roybal.

"We were furious because even if it was just a threat. We should have a zero tolerance for this. We shouldn’t be allowing people to say, ‘oh I’m going to bring a gun and shoot these n-words in the face,’" said Ashley.

They are concerned about what will happen next.

"Very much so. So much so that I have reached out to two or three headmasters of schools out here and there is a good chance our kids won’t be at Jefferson moving forward until we know what’s going on," Ashley said.

KOB 4 did reach out to Albuquerque Public Schools about a spokesperson said "at no point were staff or students in harms way.”

"APS district officials are aware of two separate student discipline issues at Jefferson Middle School this week. One incident involved a report of a social media threat. APS investigates all social media threats, even reports of threats- this one included. Police investigating the report did not find any evidence of the threat.

In a second incident it was reported to school staff that a student had used vulgar, unacceptable, and hateful racial slurs in a threat against Black students. That incident is also under investigation.

APS does not ignore safety threats. The district, to the best of its ability, utilizes all personnel and resources to investigate threats and follow law enforcement guidance when additional measures are necessary. 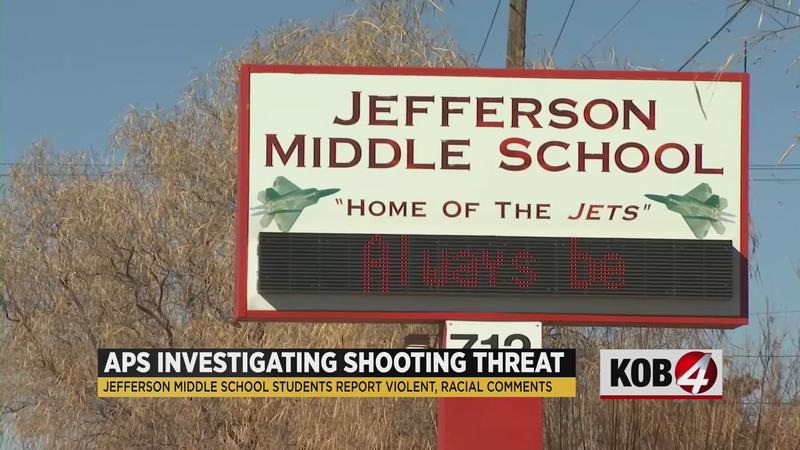 All APS staff and students have legal rights. APS staff is legally bound to investigate any allegations of wrongdoing against a staff member or student.

If anyone has information regarding either of these incidents, we ask they please call APS police at 505-243-7712 or if they wish to be anonymous, they can call CrimeStoppers at 505-843-STOP.

Albuquerque Public Schools is committed to creating a safe and comfortable environment for all."

Now, KOB 4 was also told the principal of Jefferson Middle School has been placed on leave. However, APS cannot say why or if the student will face any discipline.

Parents told KOB 4 that APS and the city held a community Zoom meeting to discuss what happened, but those parents still say the district needs to take action to prevent this situation from happening again.

Students that KOB 4 spoke with Saturday said this isn’t the first time she and other students have experienced racism at the middle school.