KOB 4 got an up-close look at the more than 10 aircraft on the ground Thursday at the Santa Fe Regional Airport. They’re providing critical support for the battles against the Calf Canyon Hermits Peak Fire and the Cerro Pelado Fire.

The aircraft drop either water or retardant over the flames.

Some of the aircraft are specialized planes called Super Scoopers, and all eight in the country are in New Mexico right now.

“Depending on the wind, each day has been a little different,” pilot Patrick Goodrich said. He works for Aero-Flite, which contracts with the U.S. Forest Service. 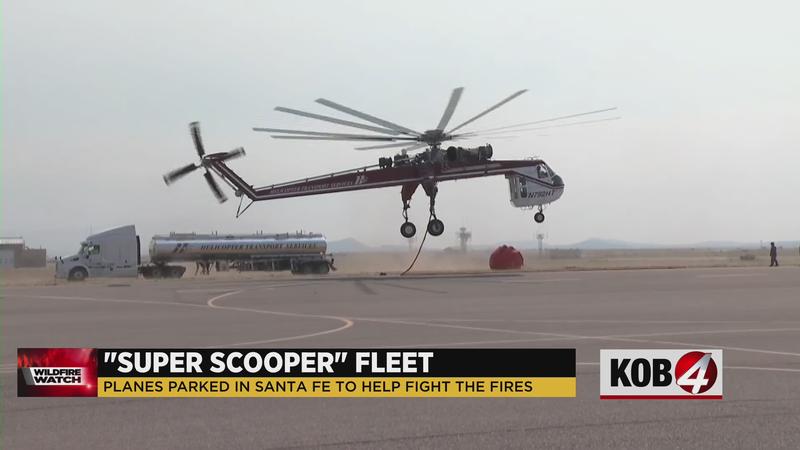 “Some days the fire and the fuels have been really receptive to the water and we’ve been able to get some really good work done, then there are days when the wind is just blowing too hard for anybody to even fly,” he said.

They’re using Lake Isabel to get water for the fire burning near Las Vegas, New Mexico, and Cochiti Lake for the fire in Sandoval county

They glide over the water at 90-plus miles per hour, filling up more than 1,600 gallons in seconds.

“You cruise across the lake at about 70 to 80 knots, and then once you bring those scoops up, those probes up, the aircraft accelerates and you can take off again,” Goodrich said.

Crews said it’s helpful that the lakes are just a few minutes away from the fires.

“It’s really key to the success of these aircraft right here. These aircraft shine when they have a water source that’s close to the fire. We make quick turnarounds,” Goodrich said.

They’re hopeful that they’ll get some good work done in the next couple of days.

The crews are here from all over the country, including Washington state and Oregon.

“You get to go bomb fires and help people out. It’s just a blast. It’s a great job,” Goodrich said.

There are other aircraft at the Santa Fe Regional Airport, including Chinooks, and sky cranes. They’re also dropping water, doing so using hoses and buckets. Many of them are former military tools.

Anyone who wants to help can call the Jet Center in Santa Fe, which is looking for food donations for all the aircraft staff.