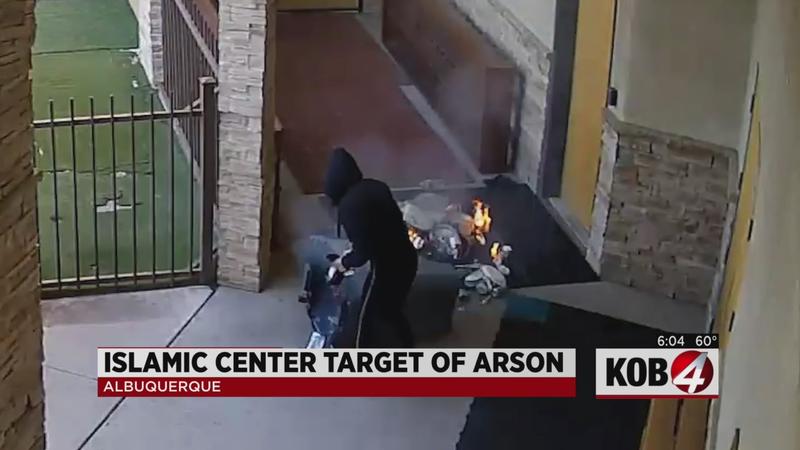 ALBUQUERQUE, N.M. – Members of an Albuquerque Islamic center are upset and afraid. They say they were victims of a hate crime this week.

A woman set multiple fires near their prayer hall. The acts were caught on surveillance video.

"So this is her in the corner right here," said Ayman Musleh, the facilities director at the Islamic Center of New Mexico, near Yale and Avenida Cesar Chavez.

Musleh showed KOB 4 a video of what appears to be a woman wearing a black hoodie setting multiple fires Monday morning. At 9:05 a.m., she is seen lighting some trash on fire in a garbage bin and then tipping it over.

There was also a fire on the playground. The suspect walked away at 9:15 a.m. and the fire grew bigger.

Aneela Abad, the center’s general secretary, said the fire was on course to spread to their prayer hall. Members believe the fire was started by a woman who was hostile toward them when she showed up at the center last week.

"For us to see that anybody could just walk in and do this, we just don’t feel safe," Abad said. "It’s a hate crime. It’s very targeted towards Muslims. Islam is, the word Islam, means peace. We stand for peace."

Abad said there is still some good in the world – some men who were working across the street ran to the center and put out the flames before they could get any bigger.

"Watch this, the fire explodes in his face at this point. You see that? He’s literally pulling it out, look at that," Abad said. "That guy is on the phone with 911 so this is the time when the call went through to 911 and look they bring a fire extinguisher."

The FBI and APD are aware of the incident.

If you have any information regarding this, contact the FBI or the Albuquerque Police Department.