ALBUQUERQUE, N.M. – An Albuquerque family is looking to pay thousands of dollars in damages after they say a street racer crashed into their backyard.

"It’s 25 feet with a busted wall,” says homeowner Mark Quiroz. "He had to be going really fast to have flipped over, get airborne and face that direction."

It happened late Thursday night off of Paseo Del Norte and Golf Course. Quiroz took video on his cell phone showing the car flipped on its side with smoke coming out of it. The next day, Quiroz was able to see the full extent of the damage in his backyard. Chunks of cinder blocks were scattered everywhere, even into his neighbor’s backyard. There were also parts of the car still in his yard, like the driver’s front bumper.

As the car was being towed away that night, Quiroz noticed something fall out of it.

He also found documents with the driver’s name on them, who he spoke to the night of the crash.

“The driver did say he panicked. He said he was stopped at the nearby traffic light and the racers came and cut him off. In his panic to over-correct, that’s how he landed up here. I found that hard to believe," said Quiroz.

That’s because Quiroz did some investigating. He found the driver’s public social media pages, including a TikTok showing the crashed car, seemingly named Monica, in his backyard.

There was another video posted a few days early showing that same car racing. Then there is the driver’s Facebook page, where he describes himself as a street racer in Albuquerque and a member of the group called, Midnight Dukes.

Quiroz discovered on those pages that the group communicates with each other through screenshots. One of them said they were meeting at the Hobby Lobby parking lot located on Montgomery Friday night.

KOB 4 decided to record that specific meet up from nearby. About a dozen cars gathered in the parking lot. An Albuquerque Police Department cruiser was also seen there but left after about five minutes. Then, 15 minutes after they were gone, some of the cars were seen racing each other up and down Montgomery.

APD has told KOB 4 – as recently as last week after a suspected street racer crashed into an Albuquerque school bus – that they target these racers only for them to relocate. At this point, APD says they’re only doing enforcement targeting street racing once a week. 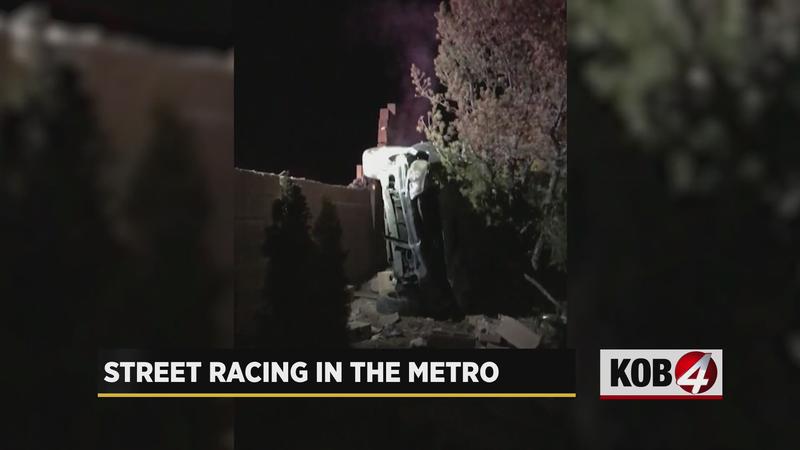