ALBUQUERQUE, N.M. – April 6 is National Living Donor Day, and KOB 4 is sharing the story of a man who is biking more than a thousand miles cross-country with one kidney – to raise awareness.

Scotch is a living organ donor from Wisconsin. He recently decided to give the gift of life to a stranger he met at a bar, named Hugh.

"Luckily, our conversation got deep enough to where he told me he had to go home and go on dialysis, and my sister-in-law had donated about 10 years before that. So I knew you could donate. I didn’t know how well you could live after donation," said Scotch.

Now, seven months after his surgery, Scotch is in the middle of a thousand-mile bike ride from San Diego to Lubbock, all to spread the word about living donation.

An impressive feat for someone who now only has one kidney.

"That’s what I’m trying to demonstrate by this bike ride, that you can donate a kidney, save someone’s life, and still do whatever you want to do," Scotch said.

Living donors can help people like Patrick O’Brien, who’s been waiting on a transplant for two years in Albuquerque.

"I’m just trying to make life work around it, waiting and hoping that I’ll find a living donor that can donate a kidney to me," said O’Brien.

On Wednesday, both men joined local bikers on a short ride from UNM Hospital to Presbyterian, to raise two donate life flags, share their stories and celebrate a record number of lives saved in 2021.through organ donation.

"Last year in the state of New Mexico we saved more lives than ever. There were 93 donor heroes who were able to result in 219 transplantable organs, and those organs went to New Mexicans all over the state. They went to Californians, they went to people in Arizona, and so you look at the impact of that and the lives that we touch through organ donation because of right here in New Mexico," said Celina Espinoza, external affairs director of New Mexico Donor Services.

2021 was a record-breaking year for lives saved through organ donation.

Last year, KOB 4 introduced you to an Albuquerque teenager who died after saving his father from a house fire. 17-year-old Xaven Garcia’s organs were donated to four others, giving them another chance at life. 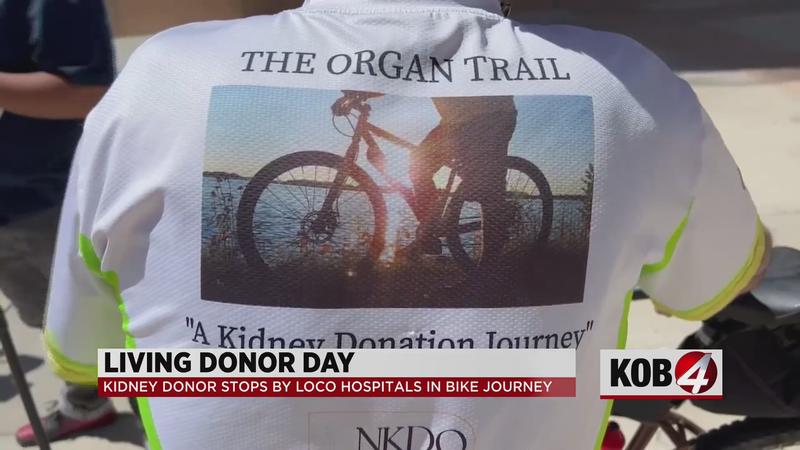