ALBUQUERQUE, N.M. – Imagine trying to carry a 200 pound weight through a fence, down the street, and out of sight from where you started. A woman watched this exact situation play out on her security cameras last week.

But the two hundred pound object was a quartz crystal, and the man carrying it stole it from her backyard. The woman said a quartz crystal that size is worth about $1,500 but the reason she kept it on her property is absolutely priceless.

Frances started collecting crystals years ago, it was a hobby of her husband’s since he was a little boy.

"We would always find rock shops in the middle of nowhere, and we’d go and look and see what we could find. And you know, it’s like a treasure hunt,” said Frances.

When he passed away four years ago, she went on the hunt for the perfect crystal for her backyard in northeast Albuquerque to keep in his memory. She found it in Arkansas — a 200 pound piece of quartz.

"He’d always zoom in and find the best pieces. And so this is the first time that I made a decision,” Frances said.

She admired it for years, as the centerpiece of her yard. but it turns out– a thief did too.

"It’s like my heart was ripped out of my chest when I discovered that and I looked at the empty table and I just felt this emptiness inside me,” she said.

Her security cameras caught a man opening her gate last week, snatching the crystal, and leaving the same way he came in– all within 90 seconds.

"I did a double take – I said no! You know I couldn’t believe my eyes,” said Frances.

Frances said she opened her normally padlocked gate for a utility worker to read her meter, and forgot to close it. She was inside when it happened and pulled out of her garage moments later.

"If I would’ve pulled out of my garage five minutes earlier, he would’ve been holding the crystal like this, he probably would’ve dropped it, and just ran off and it would’ve been destroyed."

She found small pieces of the crystal outside her home, and put them in a box. But frances can’t contain her hurt – and anger – over what this thief did.

"How dare you, do you have any idea what you are taking? This is a treasure of the earth,” she said.

Frances reported the theft to police, and sent them her security footage. She asked anyone who might go to a pawn shop or flea market in the area to keep your eye out for the piece, because it could end up there soon. 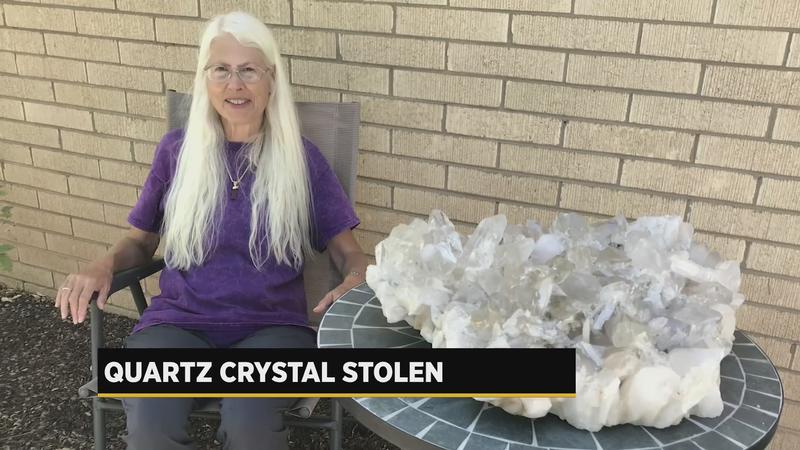