ALBUQUERQUE, N.M. – Two brides just happened to say ‘I do’ on the same day in August at Hotel Albuquerque.

"It was a beautiful time, it’s just unfortunate that this incident that occurred had tainted those memories," said Kaitlyn Nelsen, one of the brides.

However, Kaitlyn and another bride, Leah Wing, now have the same cautionary tale.

"We thought it was a little off that we only had six cards in our box and we have over 100 guests," Kaitlyn said.

Nathan Escarcega, Nelsen’s husband, said it all started adding up when a guest reached out. 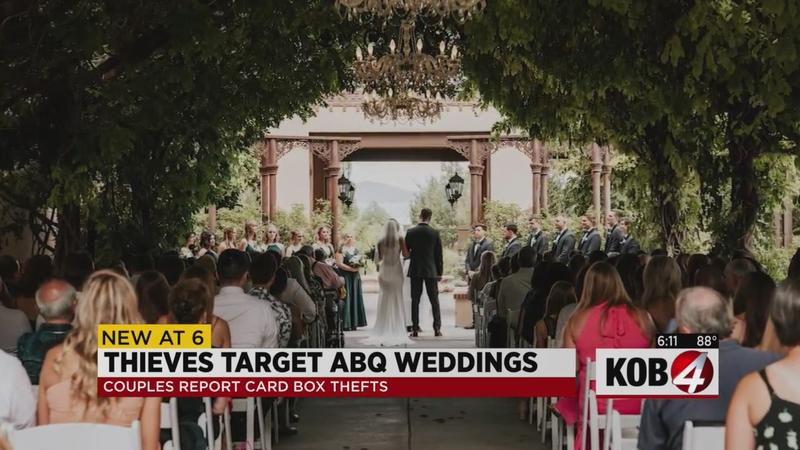 On the same day – at the same venue – Leah said the same thing happened to her. Her card box was completely empty.

"We put two and two together, and like ‘oh my gosh, I think the cards were stolen.’ I didn’t know if it was an employee, a hotel guest, or a random off the street because anyone can walk into a hotel," Therese Wing, Leah’s mom, said.

Hotel Albuquerque officials said this has never happened before. If it had, they would have made those families aware. Hotel officials said they do not believe it was an employee, and they’ve combed through the surveillance video – but have come up empty.

The brides said the gift tables were way outside of the camera’s view.

"I think the sentimental value is the biggest thing," Leah said. "I’ve kept all my cards, even birthday cards, since I was young. So it really does put a damper on the wedding. I hope the hotel makes some changes moving forward."

"Not only did we lose the monetary value of what was in those cards, but we will also never regain the sentimental value of what our guests wished us that day," Kaitlyn said.

On top of that, another couple reported to APD that their gift card box was also stolen at another hotel venue last month. KOB 4 spoke with APD, but officials there said they haven’t discovered a trend.