FARMINGTON N.M. — In front of 250,000 people, Brooklynn Kinney, an 8-year-old dancer from the Four Corners, cha-cha-cha’ed her way onto the stage at the Coachella Valley Music and Arts Festival.

“One of my dancer teachers called and asked if I wanted to dance with Karol G," Kinney said. "So we were kind of like freaking out and then, at first I didn’t know what that was, and I was like, ‘mom what is that?’ And she was telling me all about it and I was like, wait, I may be able to dance there."

Brooklynn said she put together an audition tape and sent it to Karol G’s choreographer.

“It might be a yes, it might be a no – are assuming it’s a no because it was the night right before, it was Tuesday night, and Wednesday night we would have to go down. But we didn’t get the note so I went to bed, and it was probably around 10:30 at night and my mom got the note,” Kinney said. 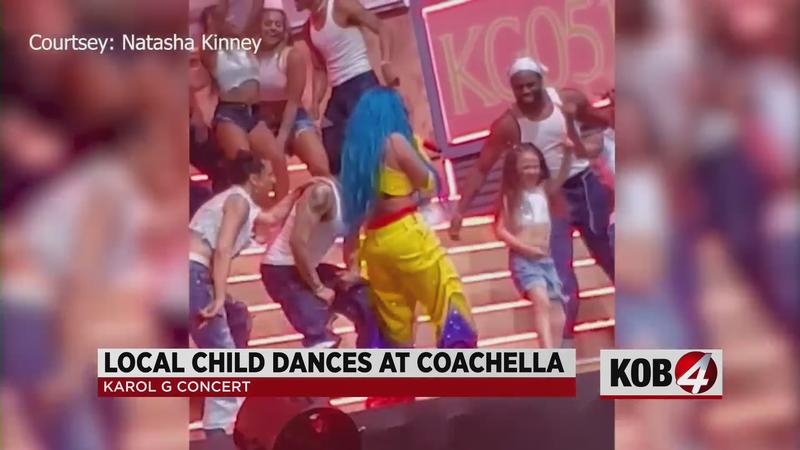 “Ahh! It was really, really crazy. I was like oh my gosh! I got to do it when I was a little kid because I bet a lot of people have been wanting to do it since they were a little kid, and I was the only little kid to do it,” Kinney said.

As for being nervous, Kinney said she shook it off.

“The first time I was kind of freaking out backstage, cause I was like, oh my gosh there is so many people," she said. "And then a bunch of the girls there, I would cha-cha with them, and then when I went on, I was like this isn’t so bad after all, and I just started dancing."

Kinney said her favorite part of the experience was being able to meet Karol G and the opportunity for her family to see her onstage doing what she loves.