ALBUQUERQUE, N.M.- Thousands of New Mexico teachers have been vaccinated in New Mexico, and more are expected to receive the vaccine this month.

“Over 30 states have already taken steps to prioritize educators for vaccination, and today I’m using the full authority of the federal government, I’m directing every state to do the same," Biden said.

In New Mexico, teachers are in the 1B category, after those with qualifying health conditions.

"It’s been a long time since we had a president that said educators are essential, are valued and need to be one of the first people in the nation to get their shots," said Ellen Bernstein, president of the Albuquerque teacher’s union. 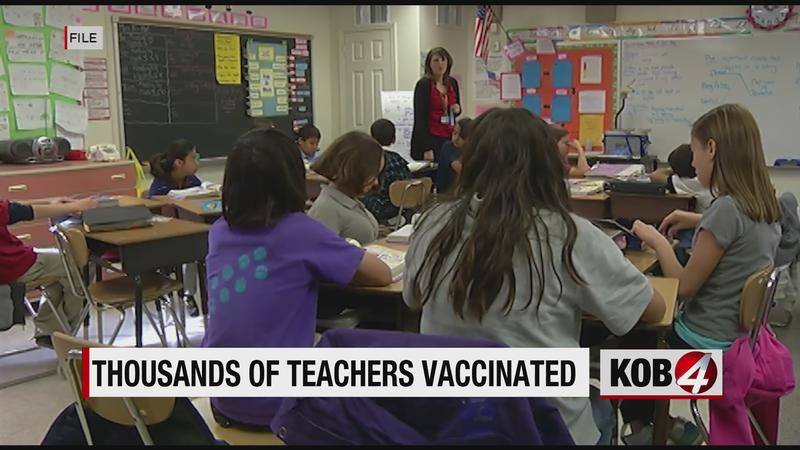 Teachers and staff have not been able to get the vaccine based on their profession.

However, if they’re over 75 or have a qualifying medical condition, they may be selected to get a vaccine.

According to the Department of Health, nearly 45,000 educators in New Mexico have signed up to get the vaccine.

More than 8,000 have received both vaccines and about 6,500 have released their first vaccine.

The state’s largest school district, APS, says they won’t consider using the hybrid model until Bernalillo County is in the green and most teachers have the vaccine.

Bernstein said we’re getting close to that becoming a reality.

"What’s happening now is the vaccines are coming, closer to having a Green county and I think they’re going to meet pretty soon, hopefully in the month of March, so we’ll have much safer teaching conditions once those two things happen," Bernstein said.

Biden says the federal government will use the federal pharmacy program to prioritize vaccinating Pre-k through 12th grade educators and staff.

"Today’s federal directive means, I hope, that a state like New Mexico, which has enacted a hybrid model and worked closely with school districts and charters to aggressively enhance the safety of school buildings and in-person learning environments, can more rapidly get back to full in-person learning. The directive is an indication that the federal government is going to support states in our efforts to get more schools open safely on a faster timeline. As before, however, supply remains the limiting factor in how quickly we can vaccinate the many different populations in need. And to that end we look forward to the support the federal government will provide states with regard to vaccine supply in meeting the goals of the directive.

"New Mexico, having largely aligned with the CDC ACIP recommendations for vaccine prioritizations, has already been able to vaccinate roughly 14,000 educators and education staff and has scheduled vaccinations for thousands more – and I would note reaching as many New Mexico workers in this categorization as possible, and indeed moving as quickly as we can through prioritization subgroups in general, has been a priority for the state that has been limited only by supply. My administration will work to continue to vaccinate New Mexicans efficiently. As we both welcome and analyze today’s action, we are seeking clarity on the federal directive as to the manner of its execution. One opportunity to close the gap between the goals of the directive and the supply factor might be for the federal government to temporarily reallocate some or all of the vaccine it withholds for federal entities – such as the Department of Defense, the Bureau of Prisons, Homeland Security and others – to states for the express purpose of expediting vaccines for educators. We will seek clarity on that proposition and other outstanding items of concern, including whether the directive supersedes prior federal emphasis on equity distribution efforts; whether the federal government will provide guidance or assistance to states where limited supply could mean older and higher-risk individuals might be forced to wait longer to meet the goals of the directive; and to what extent the federal government will employ the Defense Production Act to help states solve the supply problem and vaccinate not only their established prioritization groups while heeding the federal directive.

"Educators are and have been first among front-line workers in the state’s 1B prioritization framework, and New Mexico stands ready to accelerate its nation-leading vaccine distribution efforts and shares the federal administration’s commitment to expediting the safe return of in-person learning – we eagerly await further guidance from the federal government, particularly with regard to the supply of vaccine that is needed to meet both the expectations of constituents and federal priorities."