‘Trauma that will never go away’: Father of boy killed in hit-and-run speaks

ALBUQUERQUE, N.M. — Authorities are still searching for 27-year-old Sergio Almanza. Police believe he killed a young boy in a hit-and-run crash outside the River of Lights.

Almanza is accused of running a red light at the intersection of Tingley and Central, crashing into a family walking in the crosswalk on the way to their car. 7-year-old Pronoy Bhattacharya was killed in the crash and his father, Aditya Bhattacharya, was injured.

Pronoy’s family is pleading for someone to come forward with information on the suspect as they continue to grieve an unimaginable loss.

His family said Pronoy was so happy to be at the River of Lights – smiling and taking pictures.

"A minute later, he is just lying on the street, blood all around him," Aditya said. 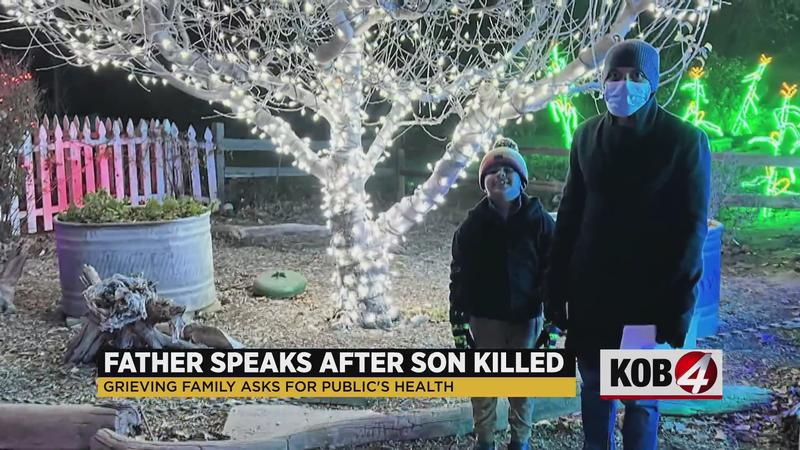 Aditya described those moments like a bad dream – he was drifting in and out of consciousness after the crash.

"The only thing I remember is my wife, Deepshikha, sitting on the sidewalk and screaming that Pronoy is dead," he said.

Within just a few minutes, Deepshikha, who is a physician, said she could tell he was gone.

"I think it’ll be very difficult for any of us to live a normal life," Aditya said. "I don’t see us being healed 10, 20, 30 years down the line. This incident will always stay with us in some form or another."

Aditya is still recovering from the crash.

"Yes, physically, I am doing OK, but it’s the mental trauma that will never go away, regardless of whatever happens in the future," he said. "We feel a strange hopelessness. Nothing will bring him back."

Friends of the family have described Pronoy as extremely bright and incredibly kind, always helping others even at a young age.

Pronoy’s death has shaken the community. It’s particularly hard to process for his 4-year-old brother, who looked up to him.

"He also keeps playing this event over and over," Aditya said. "He keeps talking to us about it. When he’s in the tub, he’s drawing pictures of someone getting run over by a vehicle."

The family is frustrated that Almanza, the suspected driver, is still a free man and that it took investigators so long to show up at his house.

"There are so many things in the system that we feel could be improved," Aditya said.

The family is now urging anyone who may be helping Almanza to stop, and help authorities find him.

"Just do the right thing," Aditya said. "Even if you’re close to him, just recognize what he did, and how wrong it was, and how it’s destroyed so many lives."

Until last month, the family thought they may stay in New Mexico forever. Now they’ve decided they’ll move soon and go back to the East Coast. No matter where they go, the holidays will always remind them of Pronoy.

Aditya said it’s ironic – he and his wife came to America from India years ago because they wanted to provide better, safer lives for their children. They remember, back then, telling their friends still in India specifically about how much safer the roads seem in America.

Police said Almanza was speeding, ran a red light, and had been caught on video drinking in a bar just minutes before the crash.

U.S. Marshals are now leading in the search – which is not just limited to New Mexico – according to a statement Thursday from an APD spokesperson. There is also a $10,830 reward from Crimestoppers for information in the case.