ALBUQUERQUE, N.M. – Despite all the obstacles, Pastor Joanne Landry says she never gave up on her neighborhood and her friends.

Landry describes what used to be an empty lot across the street from the Interfaith Bible Center as "a graveyard", but as a leader in Trumbull Village neighborhood, she had big plans.

"Our Councilman was able to get us a modular with APS," Landry explained.

The modular was a portable classroom that would soon become the Compassion Services Center, except the center didn’t come soon enough.

"The permit process took so long. I went through two architects and four engineers," Landry said. "I remember I’d go down to the city with my victory music on like today is going to be the day, and they’d say, nope, you still got to do this and this and this." 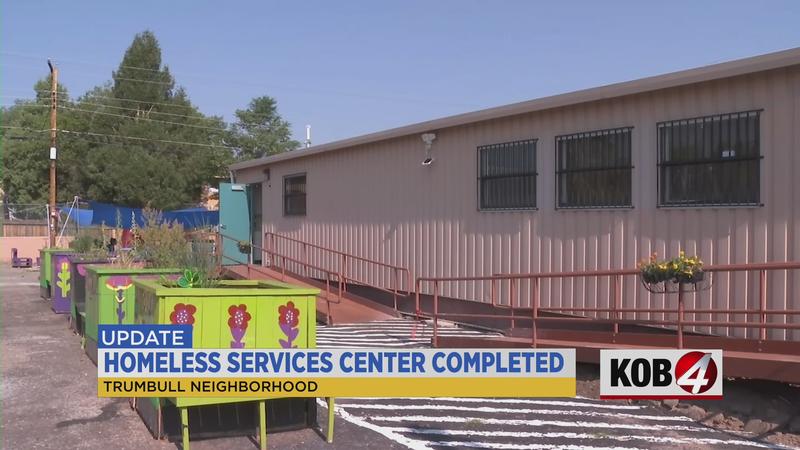 While waiting for the permits and all the utilities to get hooked up, the modular was almost destroyed.

"A young man vandalized it, broke all the windows, took out the copper punched the wall, walls, I mean it cost me 15,000 of our own personal money here with our church, to get it to where it’s at now," Landry said.

She even hired people in the homeless community who wanted this to happen.

"They came through, and they helped me put the windows in," Landry described. "They helped me fix the walls. They helped me clean it up. I mean… it’s just amazing to see how the homeless, has taken ownership and said I’ll do whatever it takes to make this work for all of us here in our community."

Nothing about getting this center up and running was easy. As crews moved the modular from APS to its new home, a truck parked on the road brought on another challenge. It was a close call as the massive unit tried to make it through small neighborhood streets.

Months later, it’s clear the center is much more than a building.

"This is our beautiful outdoor sanctuary," showed Landry.

The center is a sanctuary for the homeless, our most vulnerable population of our community.

"They deal with a lot out there," expressed Landry. "They get assaulted, their things get taken, their pets get taken."

The outdoor shower is the first of many upgrades in the works. Soon, there will be indoor showers and even a washer and dryer.

"We give them a towel, a washcloth, some body wash," Landry said. "We’re out here on site, so they can feel really safe. We had a lady yesterday that said she hadn’t showered in three-and-a-half months, and it really made her feel like a human being again."

The inside is what Pastor Landry is most proud of. The Compassion Services Center gives the community a chance to take pride and ownership in something they built together.

"We do life skills, we do self esteem building, Bible studies, and we really, really encourage them in here," Landry emphasized. "Just to start loving themselves and let them know how important they are, and that they have something to contribute."

For more than 150 homeless people, it’s a place to take a nap, eat, cleanup, and even play games during the day.

"A lot of our homeless folks, they get situated somewhere and they say you can’t sit here, you need to get moving," Landry said.

She calls the center is a home away from home.

"We have a gentleman that told me he said I used to be part of the downfall of this community, and now I want to help build it back up," Landry described.

Looking back, she says all that hard work was well worth it.

"I had to keep my focus and my vision on this outcome, because I knew these folks needed us," Landry remembered. "They weren’t just homeless people, they were my friends and family now."

As for how the neighborhood is doing?

"Look around you. Do see tents? Do you see the homeless here?… they’re not," said Landry. "We have asked all of our homeless folks to also respect the neighborhood, and they have done a beautiful job."