ALBUQUERQUE, N.M. – There are more questions about the recent stabbing of a correctional officer at one of New Mexico’s prisons.

The accused is a violent offender, convicted of murder, who’s attacked other jail workers before.

KOB 4 learned the officer – a pregnant woman – is recovering at home. But her attack, some say, is the outcome of major concerns among state corrections department workers about safety – and staffing.

New Mexico correctional workers voiced how close they came to losing one of their own this week.

"When you hear something like that, your heart just drops automatically. It’s like losing a family member. You know what I mean, that’s your brothers and sisters working side by side with you," said Executive Board Members of Local 3422.

Investigators say Jesus Alberto Robles stabbed a female sergeant at the Western New Mexico Correctional Facility as she was trying to lock up his cell Tuesday night. He was in prison for murdering his girlfriend in Roswell in 2019 – and already served time for another killing in 2004.

Last April – he reportedly stabbed a Chaves County corrections officer with a screwdriver.

"That’s one of the worst things you could ever hear is something like that happening," said Local 3422 board members.

They say it’s a red flag that Robles was at this facility in the first place.

But a representative from the department of corrections says based on Robles’ intake assessment, he was within the security level for the Grant’s facility.

"Based on his behavior, lack of disciplinaries, he was actually classified as a level three, medium security inmate," said New Mexico Corrections Department Spokesperson Eric Harrison.

Union members say there are several ways this attack could’ve been prevented– starting with staffing – a problem that’s not new.

"They’re pulling officers from the women’s facility to help cover posts at this other facility. And this happens more times than not," they said. "Many of the facilities are 20 to 30% short and there are some facilities that exceed that number. Too often the department is relying on people working on more than what they’re assigned, and that ends up being an issue when we have incidents like this. My opinion– this situation could’ve been much worse."

Corrections department representatives say the attack on this sergeant Tuesday was stopped in less than a minute. Union members say that’s partially because another staffer was with her – which they claim is often not the case.

Typically – they say that sergeant would be in charge of locking down 25 inmates cells on her own. And as far as protection– all these officers can only carry pepper spray.

"It’s not feasible to arm them in other ways,” said Harrison. "If there was ever an incident like this where there was a lethal weapon on the officer and it’s taken from them, this incident just got a lot more serious and a lot more deadly."

Union members said they are thankful that’s not the case.

"You form a camaraderie with the people you work with- you become a family. And you always want to show up to work every day, protecting your family. Working side by side with them. Make sure everyone goes home safe."

Robles has since been taken to the state’s maximum security prison in Santa Fe. Meanwhile, the department says it’s trying to find new ways to recruit officers, like bringing satellite academies to cities with easy access to the prisons. 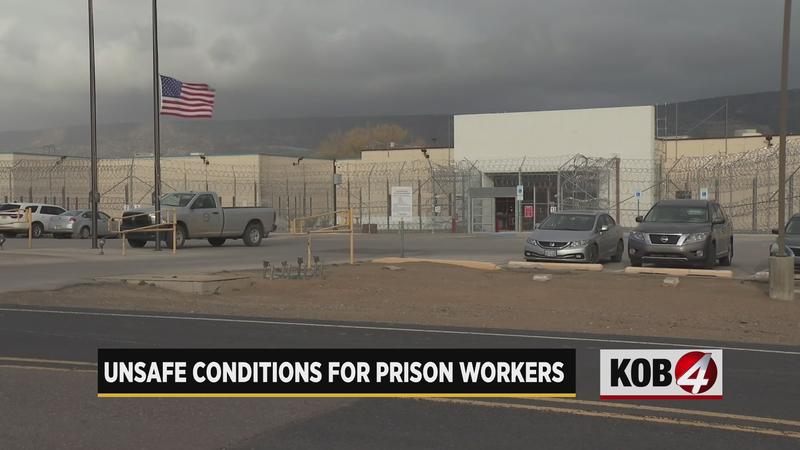