ALBUQUERQUE, N.M. — The director of UNM athletics answered questions about the future of the Lobo men’s basketball team Saturday.

This comes after UNM recently announced they will part ways with Lobo head coach Paul Weir. According to UNM, the decision was mutually agreed upon.

Coach Weir, who is only four years into his six-year contract, will continue coaching through the end of the season. Weir’s contract would have sent him packing with $700,000 total for those remaining years, but he’ll part ways with less than that.

During a Saturday press conference, UNM Athletic Director Eddie Nuñez said they agreed to just under a quarter of a million dollars total for those remaining two years.

“I know the question is going to be asked where is this money coming from, so let’s just address it right now,” Nuñez said. “We have worked with and secured all the money necessary from private funds.” 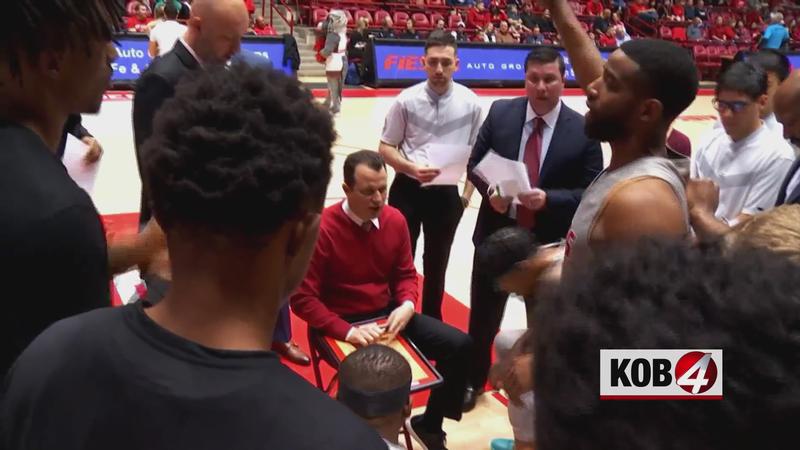 When pushed on where those “private funds” came from, Nuñez said it was inconsequential.

“How we got there is irrelevant. It’s more so the opportunity that they’re providing us this opportunity to move forward,” Nuñez said. “I wanted to make sure that we’re not putting any additional burden on this department in regards to our current budget situation and what it is. It’s a challenge we know, but we also know that for us to continue to grow our budget, this is one of these areas that we definitely need to put in the right perspective.”

Nuñez also said they’ll pay New Mexico State University $50,000 a year for two years to pay out the rest of Weir’s contract there.

“It is something we have budgeted already and have those in place, so it’s not any new money,” Nuñez said.

With the current budget deficit, KOB 4 asked how UNM Athletics will attract and pay for a new coach who will make the significant changes Nuñez is rooting for.

“I know they’re going to have everything that’s currently going on with the program. So financially, everything else, I’m not sugar coating anything, I’m not hiding from it, I’m telling them what it is from day one so they are understand where we are and where we can go,” he said.