ALBUQUERQUE, N.M. – Vaccines and boosters have been required for all students at the University of New Mexico this year, and that requirement includes student-athletes.

UNM Athletics Director Eddie Nuñez spoke openly about these requirements Tuesday afternoon during a roundtable discussion. He made it clear if an athlete wasn’t vaccinated, that would be the end of their time playing for UNM.

“In the current year we are in, that is part of the expectation that we live under, and if you don’t want to be here because you feel that your reasons and the university doesn’t agree with the reasons, whether medical or religious, or doesn’t meet that criteria then, unfortunately, New Mexico is not the place for you,” Nuñez said.

This season all student-athletes received their full vaccine and booster shots, and while they don’t know how long this requirement will last, they are having these conversations with future athletes now.

“Incoming recruits, we tell them at this point if things don’t change you might have to anticipate but understand I do feel we are going to get to a place where that won’t be a requirement,” Nuñez said.

Nuñez says he wanted to make sure no one was caught off guard by this requirement so his department talked with athletes before the final decision was made. But for now, vaccines are required and he wants to make sure his whole department is in compliance.

But vaccines weren’t the only thing Nuñez talked about Tuesday, he also brought up funding his department got from the capital overlay.

UNM Athletics got $6.1 million but that money is going to be split between six or seven different projects. While a lot of people were pushing for major projects to be done at The Pit they are only doing $300,000 of renovations there and more money is going across the street.

“We are going to redo the track out there because it is over 15 years old, that surface is, as you know, it hosts everything from the state high school to senior games to Special Olympics, it’s one of the most used tracks in the state sot that was a big project for us,” Nuñez said.

Other projects include new lights at the football stadium, to back of house improvements at The Pit like improving the locker rooms. 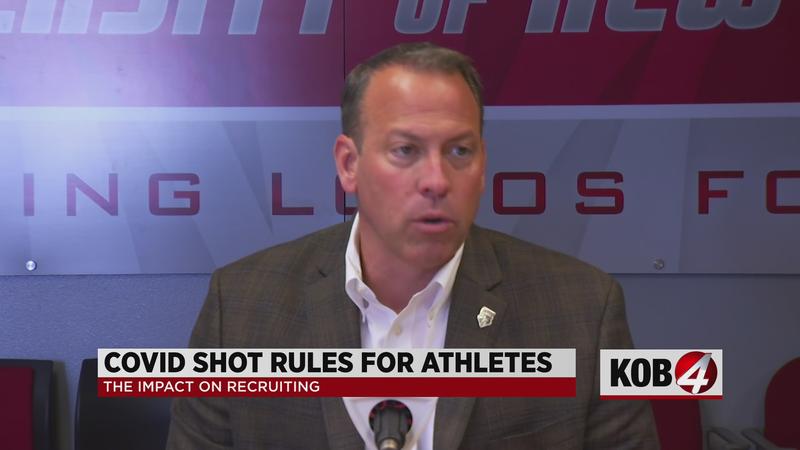