ALBUQUERQUE, N.M.- A new analysis from UNM is revealing some startling inequalities in the way New Mexico is communicating critical COVID-19 information to non-English speakers, specifically residents who speak Spanish.

“It’s a life or death situation, simply put,” said Cory Apodaca-Cordova, one of the UNM graduate students involved in the study.

The research examined a variety of communication methods, including the flashing billboards set up along New Mexico’s major roads.

Since the onset of the pandemic, the signage has displayed messages about COVID-19, wearing a mask and getting vaccinated.

However, the UNM analysis found almost all of the messages were in English, despite more than a quarter of residents in New Mexico speaking Spanish. 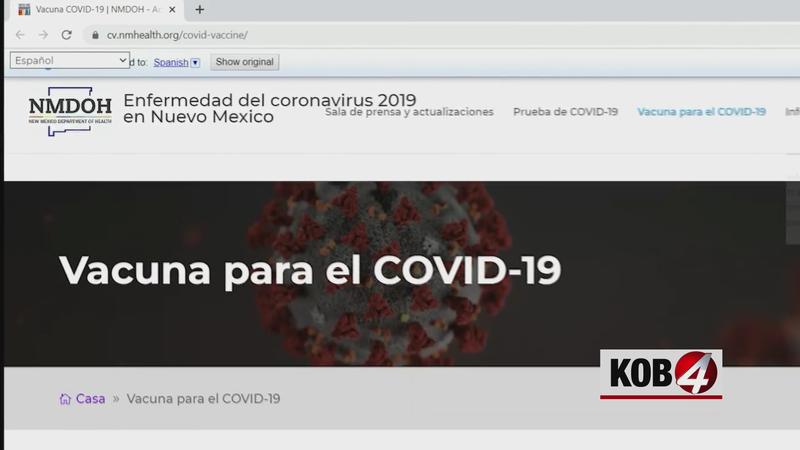 “We found that only one of them was ever listed in Spanish, which was in April of last year 2020,” said UNM graduate student and researcher Rachel Newsom.

Another issue discovered in mid-March 2021 focused on the state’s vaccine registration website. One option allowed users to opt in to a Spanish-translated version of the website, but there were some serious translation problems.

“The translation software that the New Mexico Department of Health uses tried to translate this into Spanish – so for example, Eddy county somewhere, somehow is defined as a windstorm. So then they took windstorm and defined that into Spanish – and that’s “remolino.” said UNM graduate student researcher Victoria Peña-Parr.

In a lengthy statement provided to the KOB 4 Investigates team, the NMDOH admits the technology used is an “imperfect technology.”

The issue with the vaccine registration was eventually flagged and resolved several weeks later.

Another potential hurdle to information highlighted in the report centers around the state’s Covid-19 hotline.

“It gives you a list of resources and it never offers a translation in Spanish – or you know – an option to switch to Spanish on that,” said Newsom.

Speaking broadly on the issue of equal access to COVID-19 information, NMDOH spokesperson David Morgan said: “There’s no question that providing public health information during this pandemic in a form that accurately conveys information to all New Mexicans is a top priority."

"There’s more work to do in the short run; we can do better as communicators, and we will," Morgan added later.

The state also provided this list of all the outreach work they’ve done to connect with vulnerable communities:

NMDOH is encouraging anyone who encounters any issues to report their concerns via email at: COVID.vaccines@state.nm.us