UNM researchers work to create vaccine against heroin and fentanyl

ALBUQUERQUE, N.M. — The opioid crisis continues to devastate communities around the country. New Mexico has its own unique challenges and help can be hard to get.

So what if there was a vaccine to break down that barrier? That is what researchers at UNM are working on – a vaccine to specifically target heroin and fentanyl.

UNM researchers are getting a grant around $2 million to dive into this research for two years. It has already started, with the goal of providing one more option to help fight addiction.

Kathryn Frietze is an assistant professor in the Department of Molecular Genetics and Microbiology at the UNM School of Medicine. She is working with a team to expand research on the new vaccine.

“You can imagine in a place like New Mexico – where we have a lot of rural citizens – that if someone needs to go to a doctor every single day to get a medication, that’s really difficult,” Frietze said. “In fact, that’s probably impossible for a lot of people, so it creates this barrier for people actually getting help.”

Not to mention the number of people this addiction impacts. Paul Tucker, CEO of Turning Point Recovery Center, said calls are on the rise.

“When we get 70 to 75 percent of our calls are opiate-related, it’s really striking,” Tucker said. “I mean, on the dark side of it, probably only half of our clients are opiate addicts.”

Resources are pretty thin. There are three different medications used, but he said they could use all the help they can get.

“The addiction is so powerful that it just takes them away. Even though they want to get in treatment it doesn’t work out for one reason or another, and that’s frustrating," Tucker said.

Back in the lab, Frietze and her team are narrowing in on the best vaccine to treat opioid use disorder. It would be a tool to use with other treatment options.

“So if somebody couldn’t come in to get their medication and they ended up using the drug, it would stop them from having any experience of the euphoric effects of the drug. So they basically wouldn’t get high, which would then help protect them from relapsing and using the drug again,” Frietze said.

Frietze said the work is promising.

“We have some preliminary data that shows we can get a really good immune response to the vaccine. Now it’s about testing to see if that vaccine is able to protect like we think it should,” Frietze said.

It is a two-phase grant. If they meet certain milestones, they could receive an additional three years of funding. 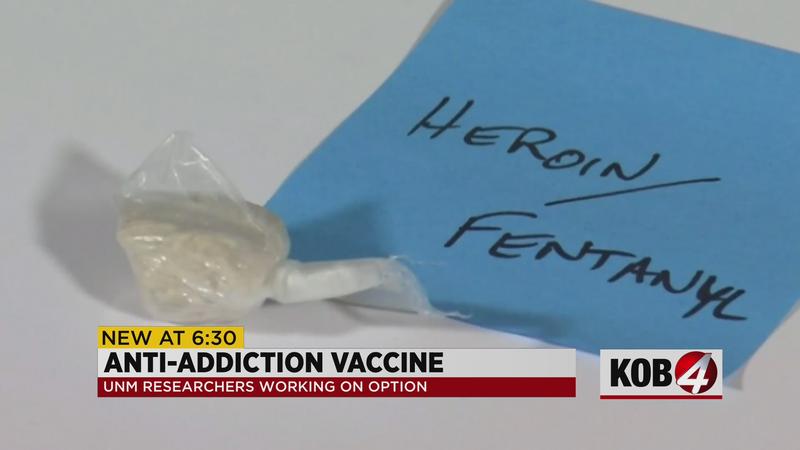 That second phase would include generating a vaccine that can be used in humans and finding out how this would impact overdose deaths.