ALBUQUERQUE, N.M. – To many kids, a wagon can be anything you imagine.

"It reminds people of the best parts of their childhood when they were playing outside with the sun in their face and the wind in their hair and they were imagining that their wagon was a rocket or a racecar," said Robert Pasin, the CEO of Radio Flyer Toy Company.

For children in the hospital, a partnership between Radio Flyer and the Starlight Children’s Foundation is giving them the chance to fulfill those vivid imaginations. They say the partnership has donated 15,000 wagons to children in hospitals across the country.

"When a child is in a hospital bed and they need to go for an MRI or into an operating room, normally that would be done in a wheelchair," said Adam Garone, the CEO of Starlight Foundation. "What we’re able to do with the wagons is transform that moment and bring some joy and happiness into something for not only the child but the family and that makes that transition so much, so much easier."

Before, patients would use a standard wagon. 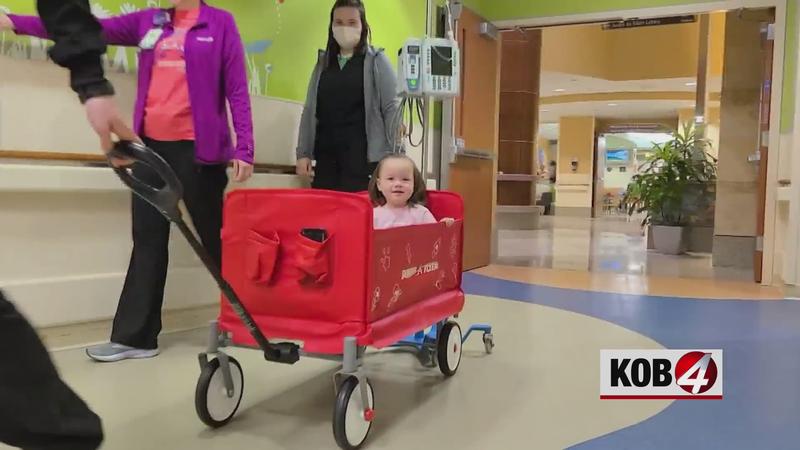 "Our team started to notice they’re kind of jury-rigging an IV pole to the back of the wagon and it looks a little bit cumbersome," Pasin remarked. "The wagons were kind of big and bulky and not easy for the hospitals to store."

They decided to create the new "Hero Wagon" with features that make moving around the hospital a little easier, including an area to attach an IV pole and material that’s easier to disinfect. UNM Hospital is one of the hundreds of hospitals that uses them.

"We know that every day right now, there’s some kids somewhere in America that is in one of these wagons battling some sort of illness or injury and we’re bringing a little bit of joy and happiness to that kid in that family," Garone said.

Thanks to donations and community partners, they hope to bring more special moments to kids who really need it.

"We’re all about transforming moments in that journey," Garone said.

If you would like to learn more about the Starlight Foundation or donate a wagon to a hospital in your area, visit their website.