UNMH thankful for US Navy team’s assistance amid omicron wave

ALBUQUERQUE, N.M. – For the first time, we’re hearing how the military is helping at Albuquerque’s UNM Hospital. About two dozen U.S. Navy sailors are assisting with caring for patients.

They arrived last week, thanks to a partnership with the Department of Defense at the direction of President Joe Biden.

Hospital leaders say these resources are making a big difference and it’s because the hospital continues to operate under crisis standards of care, at between 130% to 140% capacity.

Hospital leaders say the team’s presence has been a massive morale booster.

"This is what I became a doctor for. Is to make a difference," said U.S. Navy Lt. Commander Patrick Reeves.

Reeves is a doctor on the 23-person team and is now lending a hand at UNM Hospital. His home base is in Yuma, Arizona.

"Coming out and making a difference in a community, seeing the relief on people’s faces when we walked through the first day, being able to go into a patient room and say ‘hey you’re doing great do you want to go home?’ Things like that – it builds you up," said Reeves.

He and his team members like Jochelle Macalma, a registered nurse in the Navy, are here to help defeat the current enemy – COVID-19.

"It’s been a challenge, but it’s a challenge that we’re able to take on and be able to adapt to and hopefully we’ll– our goal is to make sure we win this fight,” Reeves said.

Macalma is one of fourteen nurses on the team and they’re helping in the hospital’s emergency room and intensive care unit.

"All we can do is smile and look forward and do the best we can every day and make sure everyone is OK and alive and safe," said Macalma.

"We are very honored and we are very grateful for the Department of Defense to be here and it’s a huge morale booster," said UNMH Chief Medical Officer Dr. Irene Agostini.

Agostini said omicron is causing another wave of new patients.

"With omicron we’re seeing hospitalizations go up about five days after the peak, so we’re fully expecting our hospitalizations to continue to go up for at least another week and possibly two weeks."

A time when these federal resources, will have all hands on deck.

"This is a daily enemy and it’s–it’s the only thing we can do. Keep fighting, keep using the tools we have, and do our best," said Reeves.

The team of 23 U.S. Navy members will be here in Albuquerque for at least another three weeks.

The Department of Defense could extend their time if the hospital requests it, and the team isn’t needed somewhere else. 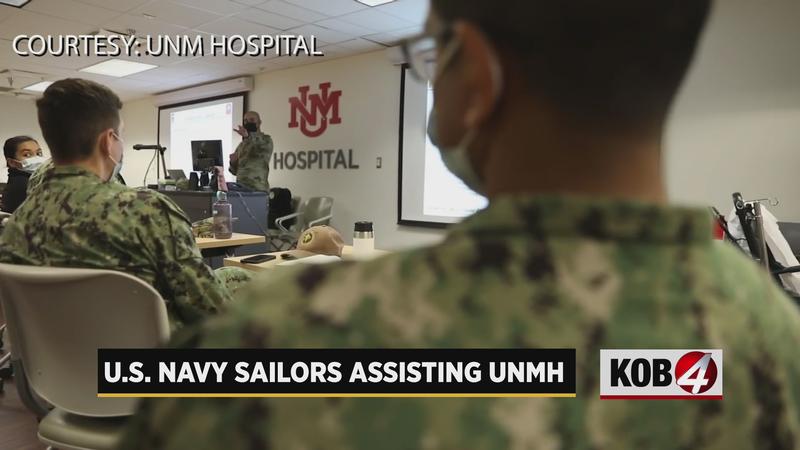