Unser’s granddaughter, Cody, said he passed away at his home in Chama after a 17-year battle with liver cancer.

Unser’s competitive life began May 29, 1939, when he was born in Albuquerque. His life and legacy go beyond his legendary career, however.

"He was known in auto racing as Big Al – the huge competitor and great racer – but to us grandkids, he was Grandpa Unser," Cody said.

Members of the motorsports community sent their condolences from across the globe, including from Indianapolis Motor Speedway owner Roger Penske and racing legend Mario Andretti. 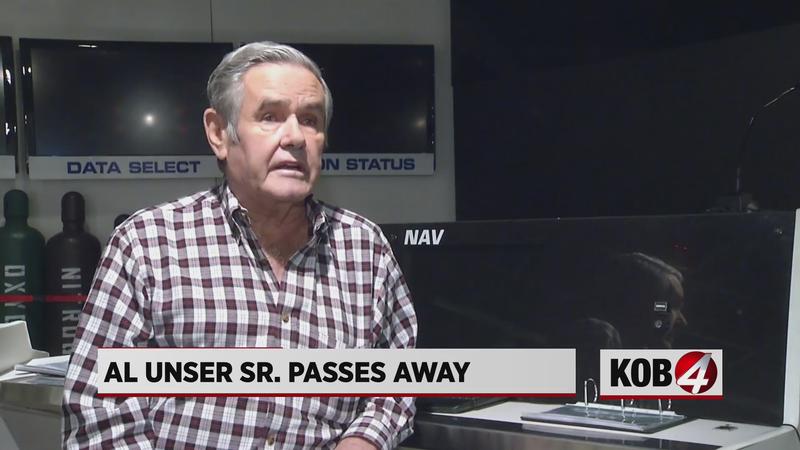 Penske tweeted, "We have lost a true racing legend and champion on and off the track. Al was the quiet leader of the Unser family…"

Unser is the third member of the famed racing family to pass away this year. Al’s older brother, Bobby, passed away in May and Bobby’s son, Bobby Jr., passed away just six weeks later.

Cody says it has been a tough year for the family.

"Going back to racing, you win races, you lose races," Cody said. "It’s the same thing in life, everybody’s been dealing with the pandemic, losing people, you try to figure out how to get back on the track. That’s where family and friends are so important, as your pit crew."

Al Unser Sr. holds the record for most laps led (644) of any driver in the Indianapolis 500’s 105-year history. Unser is also one of four drivers to win the famed 500-mile race four times – Rick Mears, A.J. Foyt and Helio Castroneves are the others.

“I am saddened to learn of the passing of New Mexican and racing icon Al Unser. One of just four individuals to win four Indianapolis 500 titles, New Mexicans were exceedingly proud to see one of our own excel on the world stage. New Mexico will always be the proud home of the Unser racing family, and I offer my thoughts and prayers to their loved ones during this difficult time.”