ALBUQUERQUE, N.M. – Another metro business is voluntarily requiring customers be vaccinated. The owners of Frenchish in Nob Hill say they’re not the only ones happy with their decision.

"Our customers have been super supportive. They’re all for it. They think it’s great," said Jennifer James, co-owner of Frenchish.

But online, they do see some negativity — much of it isn’t polite.

"It’s kind of entertaining to us to read the comments, and they’re out there. Sure,” James said.

She said the COVID vaccine requirement for customers is not hurting their business.

"I think the boycotters never came in the first place, and we’ve had lots of phone calls saying, ‘We’re coming now, for sure’." James said.

But opinions on mandates are all over the map in Albuquerque.

"I think it’s broadly a good idea, and I think they definitely have their right to do it."

"I’m against anything being mandatory."

One crowd in Albuquerque protested the vaccine requirement this week, and there was a similar event in Alamogordo.

The state fair had a mandate and organizers said there were no issues.

Gov. Michelle Lujan Grisham decided to require vaccines or regular COVID testing for state employees. Legal challenges to that have failed so far, including one this past week in federal court.

There are more of those court battles in Florida, Arizona and New York. Some are winning — putting some mandates on hold.

"These policies are what the science tells us we need to do,” said President Joe Biden.

Many unvaccinated people are trying to use a religious exemption to avoid losing their jobs, including more than 2,000 employees at the Los Angeles Police Department.

Three Texans are facing charges in New York after fighting with a restaurant hostess who asked them to show their vaccination cards.

"I’m disappointed. I think it’s a good idea we have a mandate of the vaccine cards."

Los Angeles County will soon require proof of vaccination or a negative test at its restaurants and bars. 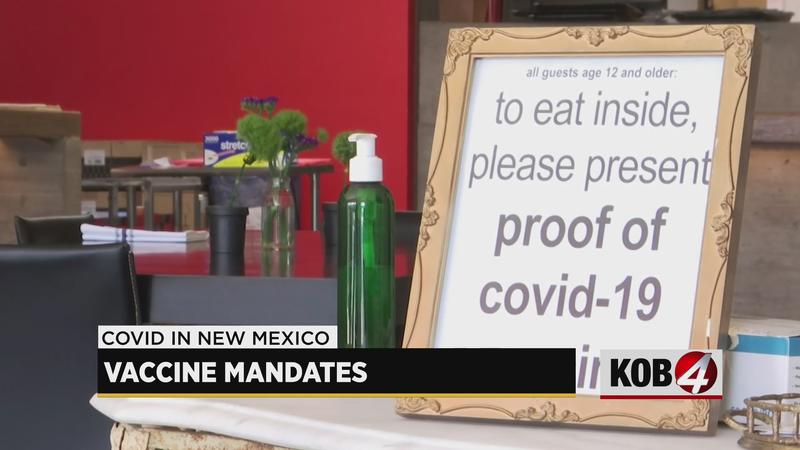