According to a criminal complaint, Gonzales was giving a speech at Revel Entertainment when a drone dangling an adult toy started to fly in front of him. The owner of Revel reportedly pulled the drone from the air, prompting 20-year-old Kaelyn Dreyer to grab the drone from the owner.

"At some point, some people sprung up and they were carrying signs and it was a coordinated effort, very intentional and these people were trained," Gonzales said.

After unsuccessfully trying to grab the drone, Dreyer then turned to the sheriff, who was still on stage, and "balled his fist and swung it." The complaint stated that Gonzales attempted to move out of the way and was "struck in the hands."

"He tried to take a swing at me and he glanced across my arms and struck me," Gonzales said. "And I just took a step back. It wasn’t anything I was very concerned about. I’ve been in a lot worse situations" 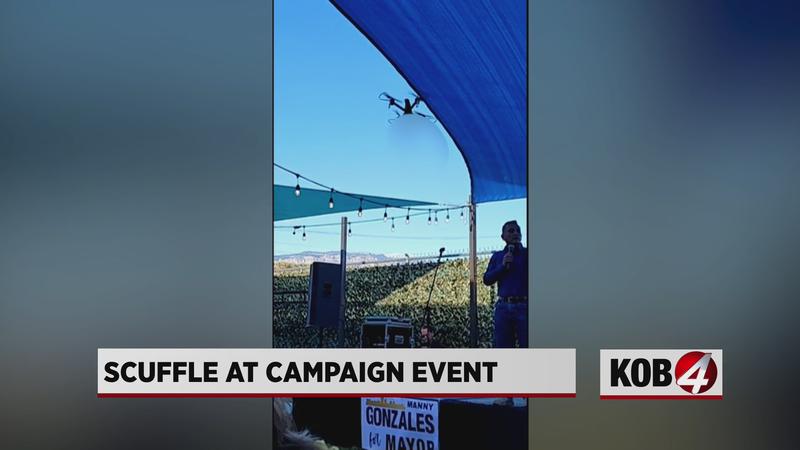 Gonzales is not seen being assaulted on video because a man steps in the way of the camera.

According to court documents, Dreyer "never intended to hit Manuel but was upset that Manuel was answering a question, from the crowd, in a disrespectful way. He stated that he did ball his fist and was just going to swing them through the air and leave…"

A spokesperson for Sheriff Gonzales’ campaign said an off-duty deputy “de-escalated the assailant’s efforts." Dreyer was pinned to the ground then taken into custody following the incident, but has since been released.

Gonzales said he will not let the incident intimidate him.

"I understand the first amendment, and if you want to come to an event that we’re hosting, you have the right to speak freely but at the point where you commit a crime with the people that we have there, you’re going to go to jail," Gonzales said.