Video: Man steals $16K worth of equipment from Albuquerque business

Moreno Heating and Refrigeration has been in the same location for 30 years and since September, his business has been robbed three times. This time, he caught the thief on camera.

Ernie Moreno says he was up most of Tuesday night trying to calculate the cost of the stolen equipment and, so far, he says it will cost over $16,000 to replace.

“Turned around real calm like he was an employee,” said Moreno.

The thief parked and started loading up anything he could lift.

Before Moreno saw the footage, he noticed something was off in his equipment shed.

“I was walking over here trying to find some duct work and I notice one of the jumping jacks was missing. I have two, this one and the other one was right here,” said Moreno.

He called his employees to see if they had it, but when they said no, he checked his cameras.

“That piece of equipment is $2,600 and change,” said Moreno. “It’s very frustrating, now I’m going to have to replace every bit of it because this is how we earn our keep.”

Watching the video back, Moreno realized he wasn’t the only one the thief stole from

“That is my granddaughter’s car, how do you think I feel?” asked Moreno.

Multiple valuables and sensitive documents were also taken from her car

“I feel like I should have been outside trying to stop him but then my family tells me, ‘you didn’t know if he had a gun,’ if he did I might not be here talking about this experience,” Moreno said.

“I thought my fencing was safe but they didn’t jump the fence, they came straight through the door.”

“If someone can identify this perpetrator, this thief, I wish I could say more, but I can’t, I’m going to offer a $1,500 reward for any information and conviction,” he said.

The thief was only there for seven minutes before he drove off with thousands of dollars of equipment in this black SUV. Moreno would describe the man as 5 foot 7 inches, in their late 20s and around 180 pounds.

If you recognize the suspect, call the Bernalillo County Sheriff’s Office. 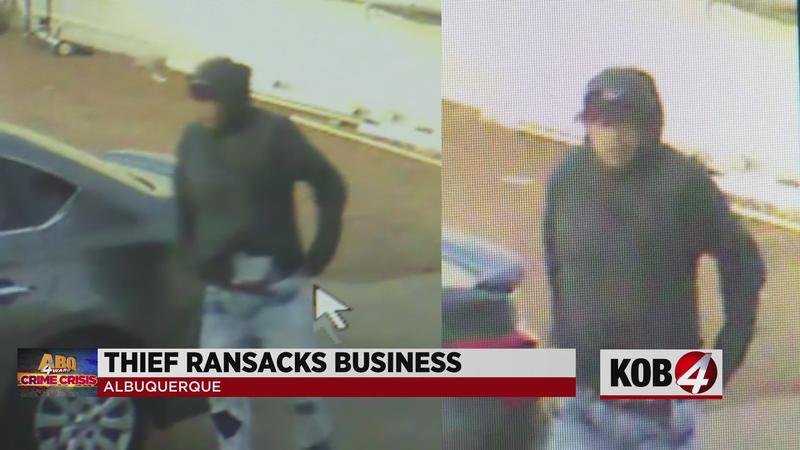