ALBUQUERQUE, N.M. — A Portales family is miraculously safe after their car was swept down a drainage ditch during a flash flood.

The rescue, which was caught on camera, gave a glimpse at just how dangerous driving through flood waters can be.

The car traveled half a mile before coming to a stop on a pipe. Officials with the fire department said if it had traveled about a half mile further, it would have been sucked under the road.

“And there’s always potential for the vehicle to flip over, upside down and take on water, creating further issues for the family,” said Fire Chief TJ Cathey, with the Portales Fire Department.

After about an hour of securing the vehicle and getting a ladder truck in place, firefighters pulled two children and their mother from the back window. 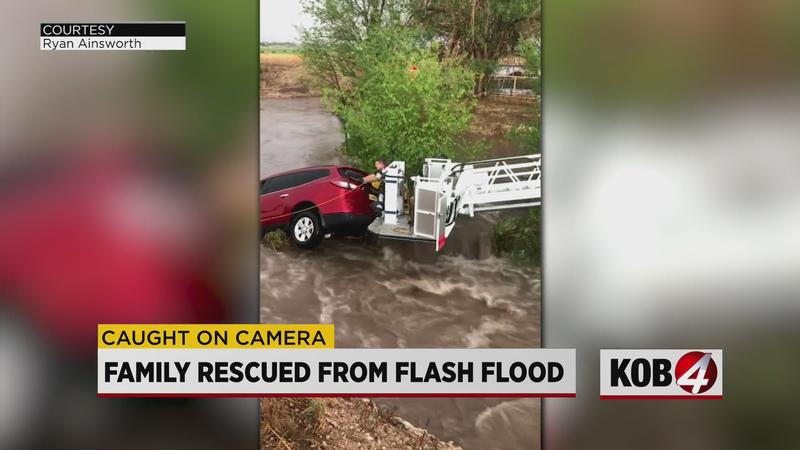 The Portales Fire Department said the family’s calm demeanor helped with the rescue.

“Anybody traveling half a mile downstream, that’s—that would be hard to keep calm with,” said Battalion Chief Hugh Frank, with the Portales Fire Department.

Still, the fire department said the situation could have been much worse, and hope people will think twice before driving through flood waters.

"A lot of people are very surprised at how easily water carries the vehicle away or turns it over," Frank said. "The undercurrents and the fast moving water can make it pretty dangerous in a hurry."

The family was undoubtedly lucky thanks to a well-placed pipe and a fire department that came to the rescue.

"I can’t praise these guys enough on how effectively and efficiently they accomplished a very dangerous rescue with very limited personnel," said the fire chief.