ALBUQUERQUE, N.M. — Paul Mondragon knows the weather can change quickly in the metro area, but a “rookie mistake” put him and his friends in a dangerous situation on Memorial Day.

Mondragon was planning to paddle board with some friends on the Rio Grande Monday.

“This, unfortunately, was a, basically pulled a rookie mistake and not double-checking the weather,” he said.

In the beginning, things were off to a great start.

"Up until that point we had two hours of just gorgeous Albuquerque beauty on the river,” he said. 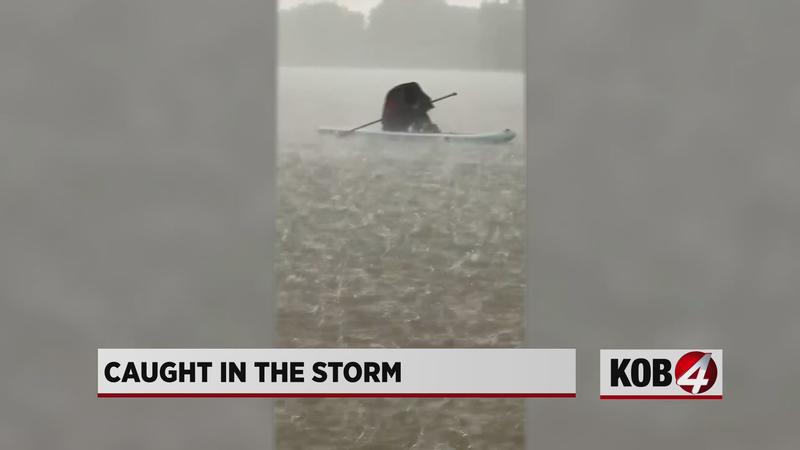 But that all changed once they were riding a stretch of river close to Old Town.

"Saw the clouds starting to come from the west and could hear them hitting—hear the raindrops and the hail hitting the leaves in the bosque. So, we started looking at each other and are like, ‘Can you hear that?’” he said.

That’s when the sky opened up and started dumping hail in a torrential downpour.

"It was really uncomfortable,” Mondragon said. “First was the stinging from the hail because it was hitting hands and shoulders and arms, which were bare. And then the temperature dropped."

Getting caught on the river during a rainstorm was not only a bummer, but dangerous. According to a U.S. geological survey that measures water flow, the Rio Grande at Alameda Boulevard shot up to over 4,000 cubic feet per second, which was about four times the normal river flow.

Luckily, Mondragon said his group was equipped with life jackets, and they were able to get off the river safely after about 15 minutes of heavy hail.

This experience, Mondragon said, won’t deter him from getting back on the water. But next time he said he’ll plan ahead.

"Double-check the weather,” he said. “We expected to get off the river by the time we thought the weather was going to come in. Unfortunately, it hit us a little sooner."