ESPAÑOLA, N.M. — A family traveling through New Mexico says they were assaulted by police – as they were just sleeping in their van – waiting on repairs. They uploaded the video to YouTube where it’s gotten a few thousand views.

The short answer is the family was in the wrong place at the wrong time.

Law enforcement officers were executing a search warrant of the mechanic shop where the family was staying while their van was being repaired, when the police noticed there were people in the van.

Body camera video on the early morning of May 18, 2021 showed a Taos police officer was helping with a search warrant with the Drug Enforcement Agency, state police and Taos County Sheriff’s Office.

While there is no audio in the first part of the video, you can see the surprise and fear on the family’s faces as the officer points a gun at them in bed and shouts commands, "Do not move, now walk out."

A family was documenting their life on the road for over a year through their YouTube channel but when they reached New Mexico, they said their van needed repairs, so they stopped at a mechanic in Español and spent the night in their parking lot.

The father, Angelo, seen on video was not wearing any pants or underwear, and began to ask the officers questions but doesn’t get any answers.

At this point, the family says the officer repeatedly punched Angelo in the face, but they edited out that part of the video saying it’s inappropriate for YouTube.

Seconds later, the video shows Angelo leaving the van and the police start asking the family questions –but the family had just as many questions for the officers.

"Statewide- On May 18, 2021, in an effort to disrupt a drug trafficking organization, the Region III Drug Task Force which is comprised of city, state, and county law enforcement agencies assisted the United States Drug Enforcement Administration (DEA) with executing a search warrant at H & A Automotive in Espanola, New Mexico. For inquiries regarding the search warrant, please contact the United States Drug Enforcement Agency.

As officers conducted a security sweep of the curtilage, they located a small white bus that was parked outside on the property to be searched. Officers observed movement inside a small white bus. An officer with the Taos Police Department and deputy with the Taos County Sheriff’s Office made entry into the bus in an attempt to secure the vehicle and determine if any suspects of the investigation were inside.

As part of an agreement, all complaints of officer misconduct and use of force incidents by a Region III Drug Task Force officer are investigated by their respective law enforcement agency. 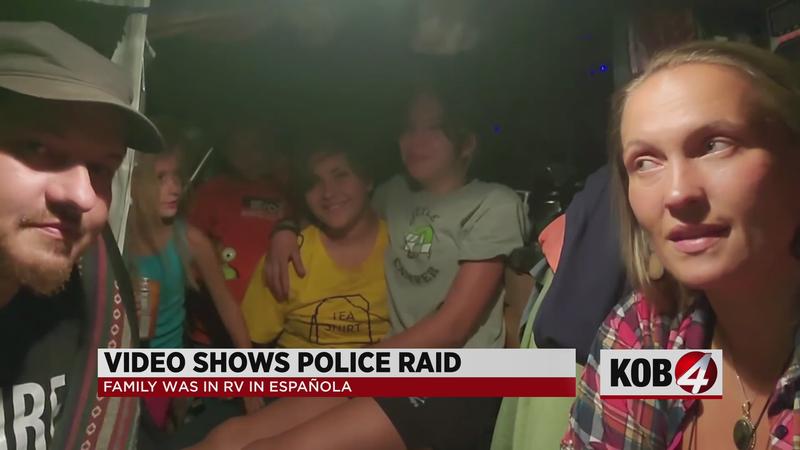 For inquiries about any administrative investigation conducted regarding the officer involved in the interaction which led to a use of force, please contact the Taos Police Department.

The New Mexico State Police holds our officers to a high level of professionalism.

New Mexico State Police officers present at the scene were not involved in any use of force or misconduct during the investigation."

As for the officer who is being accused of punching Angelo – he works for the Taos Police Department and he is now under a use of force investigation, according to state police.

In response to this video, the Taos Police Department also issued a statement saying:

"These comments relate to a recent NMSP news release (below) concerning an edited on-line YouTube video of a drug raid by the inter-jurisdictional Region III Drug Task Force, to which an officer of the Taos Police Department was assigned.

As stated in the NMSP news release, the subject incident occurred during a legal federal drug enforcement operation being carried out at the site under a legally issued warrant that took place in the City of Espanola, NM on May 18, 2021. The clearing of persons from the vehicle on the site during the operation is a standard procedure to ensure that the persons in the parked vehicle were, first, not the subjects being sought and, second, if not, that they were not in the line of fire during the execution of the operation. The persons were identified and removed for their own safety in a dangerous situation.

At the time of the raid, the involved Taos Police Officer followed all protocols in making immediate and proper notifications to the on-site officer-in-charge and, additionally, followed Taos Police Department policy related to the documentation/reporting of Use of Force incidents to our department. The incident was subsequently fully reviewed/investigated by the involved officer’s chain of command, per Taos Police Department policy. No violation of any policy was determined to have occurred.

Subsequently, the male subject from the bus submitted an IPRA request a short time after the incident, the request asking for related officer Body Worn Camera video, and that request was honored per the State of New Mexico public records laws. Based on this IPRA request, it is evident, as well as from the video, that the involved party was fully informed of both the identity of the police officer and the agency(ies) this detective was operating under.

The subject YouTube video appears to contain an edited version of the aforementioned Body Worn Camera video interspersed with additional phone camera video taken by the subject(s). There is no time stamp to determine if the subject video at the beginning of the video was taken before, during or after the event. However, the editing of the two (or more) videos clearly deletes the segment where use of force is alleged and does not accurately depict the incident as it occurred, instead relying on audio narration by the female in the video and subtitles obviously inserted at a later date.

Statements by the narrator that the subject’s nose is broken and the subject that he is bleeding clearly are not documented by the video in which he appears or by the EMS team that arrives, in which no assistance appears to be required or requested by the subject.

To be clear, this incident occurred nearly 9 months ago and during that 9-month time period neither the involved party nor any other individual or entity has filed or inquired about filing a complaint of any kind related to the subject incident with either the Taos Police Department nor, to our knowledge, any other law enforcement agency.

While the Taos Police Department has not verified the source of this posting, it is clear that this is a heavily edited version of a Body Worn Camera video, most likely that provided through the public records request, and other added video, that does not accurately depict what occurred and attempts to create an impression that does not reflect the full facts surrounding this incident."

The chief of police also said the video the family edited together does not accurately show the incident —because they intentionally left out the alleged punching.