ALBUQUERQUE, N.M. – Were there warning signs? Or perhaps opportunities to intervene before 13-year-old Bennie Hargrove was shot and killed at Washington Middle School in August?

That’s what a newly-filed lawsuit is alleging.

A lawsuit, filed on November 24, 2021, claims negligence against Washington Middle School, the principal, Board of Education for Albuquerque Public Schools, the superintendent, and the parents of the alleged shooter Juan Saucedo Jr.

Disturbing allegations are coming out of a lawsuit filed on behalf of Bennie Hargrove’s family. Shane Maier, with the Law Office of Adam Oakey, is working on that lawsuit with Frank Davis Jr. of Freedman Boyd Hollander Goldbern Urias & Ward P.A., alleging more could have been done to prevent that tragedy.

Maier said the suspect, Juan Saucedo Jr., had a "long history of violence and bullying." Documents allege he was on a plan where he was supposed to be closely monitored.

"There’s multiple times, if they would have followed their own policy, Bennie would be alive today," Maier said. "But instead they chose to ignore the dangerous condition they were creating at Washington Middle School."

The day before the deadly shooting, they claim Washington Middle School staff were notified but took no action on a report of bullying. According to documents, they were also notified, that same day, that Saucedo Jr. brought a gun to school.

It said he "had shown this firearm to his friends" a day before allegedly killing Bennie Hargrove.

"If they followed their own guidelines, he should have been suspended, a minimum of 5 days because we do know he was on a plan for being violent and being violent to other students," Maier said.

Just before Hargrove was shot multiple times, Maier said they also have a video showing both a resource officer and principal perhaps witnessing a confrontation between Hargrove and Saucedo.

"It established that there was an opportunity to intervene," Oakey said. "So there was a good while that they were arguing and having this confrontation before the gun was pulled."

But the goal of this lawsuit is to get to the bottom of what really happened. Did the school know about the gun? Did they investigate? Could more have been done to prevent this senseless tragedy?

"We are hoping that everyone can come to the table and actually come to an agreement and make change together," Oakey said.

KOB 4 reached out to APS to ask about those allegations. A spokesperson said "APS does not comment on pending litigation." 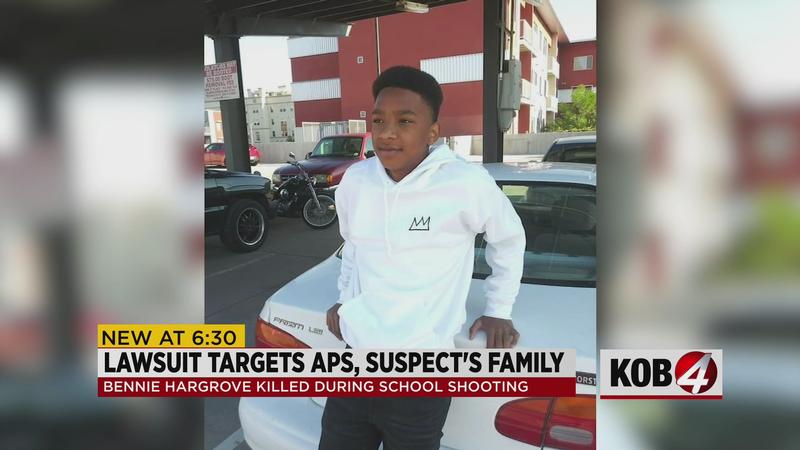