ALBUQUERQUE, N.M. — What’s The Buzz is one of two exhibits opening at the New Mexico Museum of Natural History and Science Friday.

KOB 4 first told you about Outbreak, a new exhibit on the history of pandemics.

What’s The Buzz takes a look at bees and how important the insects are to society.

"For over a hundred years people have been predicting the demise of bees, due to human interaction with them, and they started to see some of that in 2015, 2016 with the colony collapse disorder," said Margaret Marino, director of the New Mexico Museum of Natural History and Science. "These are important insects that we rely on for our well-being, so hopefully people come in and bring themselves up to speed on that. A lot of people that grow crops are raising their own bees now, because it helps them make sure their crops are pollinated, so there’s a lot of interesting topics out there."

This exhibit will have something for museum-goers of all ages. 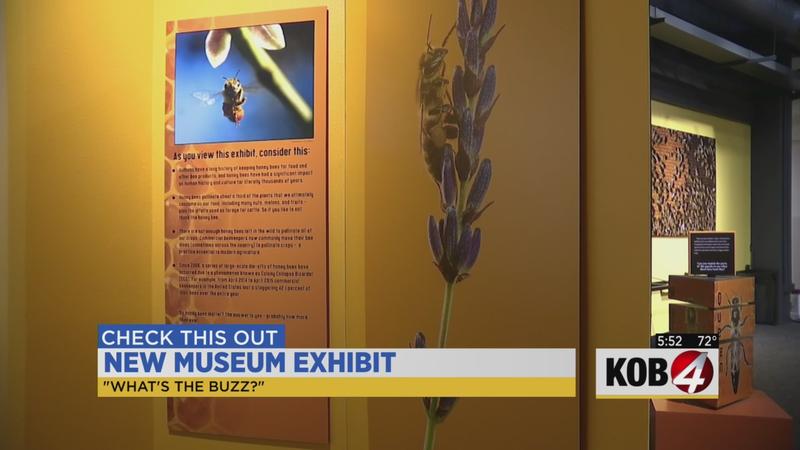 "There’s interactive parts in there that make it a little fun for the children, and there’s just a lot of stuff about their anatomy, what they do and the fact that they’re responsible for one-third of the edible crops in the world," Marino said.

Children will have the chance to dance like bees with an interactive dance floor where they can do the "waggle dance."

"They’re incredibly complex insects – their behavior, what they do, how they work together," Marino explained. "How they support the colony. And I think all of this stuff leads you to be actually overly impressed with nature."

The interactive exhibit is fun while also giving visitors a chance to learn about environmental issues.

"Particularly for the teens and those who are studying these in schools, I think both bees and pandemic will be interesting to them," Marino said.

Both exhibits will open Friday and will run through early 2022.