ALBUQUERQUE, N.M. – Santa knows when you are sleeping and knows when you’re awake, but did you know, there is an entire team watching his every move, 24/7?

The North American Aerospace Defense Command (NORAD) has made it their mission to know exactly where Santa is on Christmas Eve. Each year they track his long journey from the North Pole, across the entire world. They also protect him along the way.

You may be wondering how this team keeps tabs on one of the most secretive and fast-moving guys in the entire world. Unlike Santa, NORAD is not using magic.

"We are monitoring for, for ballistic missile launches, and we’re tracking aircraft throughout North America and then throughout the world,” Knight said. “So we have sensors that are actually in the North Pole, or can sense what’s going on in the North Pole, and we track Santa as soon as he takes off and then starts traveling around the world." 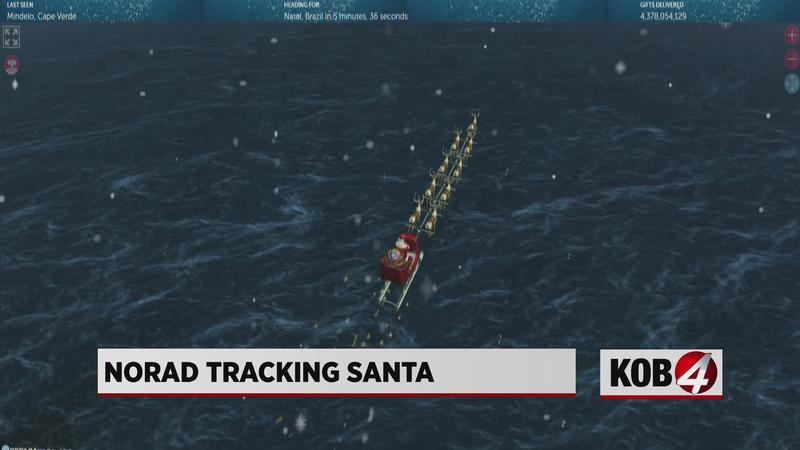 NORAD’s been doing this for more than 60 years. The mission actually began with one phone call to a wrong number.

"A child got a hold of a phone number that had been misprinted, and called the command center in Cheyenne Mountain,” Knight said.

"Technology has changed, you know, satellites and radars has definitely changed. There’s been a variety of upgrades, you know, over the time, but it’s still basically the same business and we’re continuing to do that."

A big part of that business is protecting Santa’s privacy. "Santa is an independent guy,” Knight said. “We’re just here to track him, and if we have talked to him, we probably can’t say."

"He doesn’t stop to share his secrets with us, just like he doesn’t share how he manages to go down those chimneys and get to those stockings," Knight added.

If you want to know where Santa is right now, NORAD has made it super easy to keep track of him. You can call +1 (877) HI-NORAD or click here for live updates.