While APS stays remain virtual, neighboring states send students back to the classroom

ALBUQUERQUE, N.M. — Many parents, students, and teachers have spoken up over the last few weeks about how the decision to keep students virtual will affect student athletes.

New Mexico has opted for a slower school reopening approach compared to neighboring states such as Texas, Colorado and Arizona.

In-person learning in New Mexico has been very controversial. Some people want it, and others do not—but what seems to be common ground is that sports should not be decided by moving into an in-person learning model.

Last week, the APS Board of Education voted to remain virtual, which meant student athletes would not be allowed to compete in their sport.

APS is a district of made up of more than 90,000 students, so KOB 4 compared it to similar districts in neighboring states. 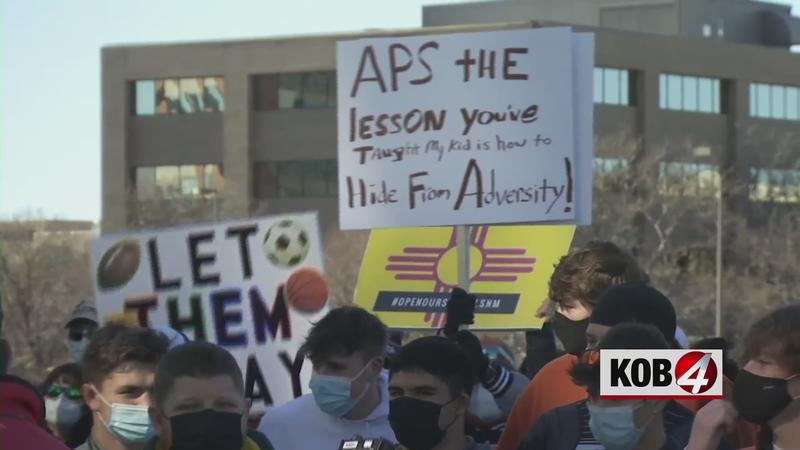 On Monday, state officials announced 237 new COVID cases around the state. In Bernalillo County, the test positivity rate was 4.49%. That rate is significantly better than what is happening next door in Texas.

Ft. Worth ISD has more than 84,000 students, and started in-person learning back in October 2020. That was around the same time that students were able to resume University Interscholastic League (UIL) activities, including sports. Students were able to participate in those activities regardless of whether they were learning remotely or in-person.

Recent data for Tarrant County—the county that holds Ft. Worth—shows it had 413 cases Monday with a positivity rate of 17%.

Denver Public Schools has roughly 90,000 students. Students there were able to return to in-person learning, or stay remote, beginning in January. All student who selected in-person learning returned to the classroom Feb. 1. Like Texas, student athletes were eligible to participate in sports there.

From the most recent data, the positivity rate in Denver County is 2.6%.

Arizona’s Mesa Public Schools has more than 60,000 students. Those students also returned to in-person learning if they want to.

According to the Arizona Interscholastic Association, sports are underway. District officials are even allowing spectators to some extent.

According to a tweet by Maricopa health, the county reported 1,371 new cases on February 20th with a statewide positivity rate of 14.2%.

As for Albuquerque Public Schools, leaders said they may reconsider the virtual learning model if and when Bernalillo County turns green, or when enough teachers have been vaccinated.