Why Holloman AFB was chosen to house Afghan refugees

OTERO COUNTY, N.M. – Holloman Air Force Base is situated outside the city limits of Alamogordo, bordering the White Sands Missile Range. It’s these two things that make it a perfect location to house and process some of the thousands of Afghan refugees that have come to the U.S.

According to the Alamogordo Center of Commerce, Holloman Air Fore Base briefed the city on why it was chosen.

In a press release, Executive Director G.B. Oliver said the runway configuration is ideal for this mission, and Holloman is no stranger to landing large aircraft.

But even as an ideal candidate to house refugees, there have been questions about the vetting process being secure enough.

On Tuesday, Rep.Yvette Herrell and Melanie Stansbury took a tour of the refugee camp.

Herrell said she was impressed with the camp, but still has concerns.

"I do understand that before the Afghans get to Holloman Air Force Base its been through three different vetting processes but there is still unanswered questions as far as how many of the people here were interpreters, what was their role in Afghanistan,” she said.

Stansbury said she’s satisfied with the vetting that’s been done.

“They were then taken to these Lilly pad places in Germany and in the gulf where they were biometrically scanned and their other biographical stuff was looked at,” said Stansbury.

According to the Alamogordo Center of Commerce, the camp is set up in a secluded area with "absolutely no security concerns based on the procedures Holloman has established."

Holloman is also the third-largest base by land and size in the Air Force, meaning there’s plenty of space to house refugees without interfering with base operations.

They also said Holloman is the third-largest base by land and size in the air force – meaning there’s plenty of space to house refugees without interfering with base operations. 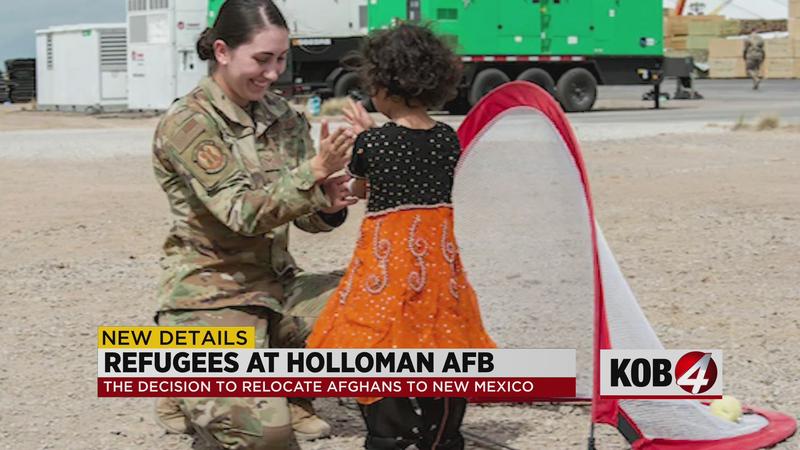