Why were the previous cases involving Jaramillo dropped?

CIBOLA COUNTY, N.M. — The story that Jeannine Jaramillo has told about getting kidnapped at knifepoint – leading to a high-speed police chase – is a tale she’s told before. KOB 4 has found two cases where Jaramillo has told police an almost identical story.

Late last year, Cibola County Sheriff’s deputies arrested Jaramillo for taking off in a stolen car – twice. Both times, she claimed her boyfriend was in the car with her.

Surveillance video from the first stolen car pursuit in September does show an argument between Jaramillo and a man, but he walks away, and then the car is driven out of frame.

"What happened, in this case, was that we did not, we felt we did not have enough information," said Barbara Romo, the district attorney for the 13th Judicial District. "We wanted further investigation before we moved further on the case."

Romo said her office sent the charges back to the sheriff’s office to re-file. After the case was dropped, Jaramillo was arrested for stealing a Century Link bucket truck in Grants. Jaramillo told a similar story, and that case was also dropped. 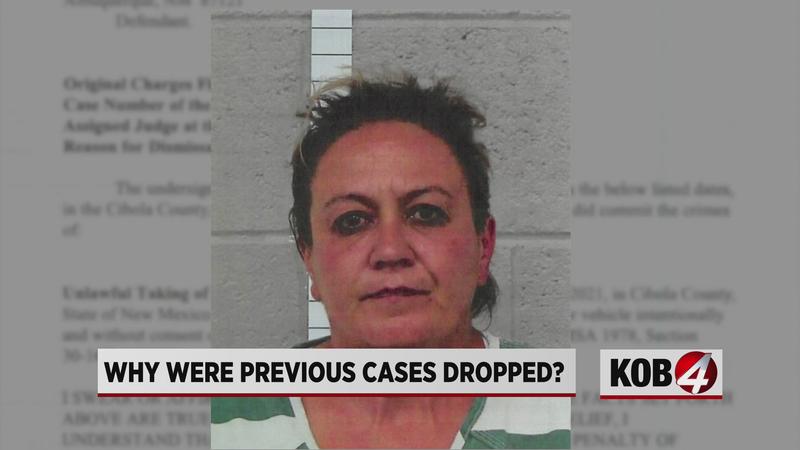 Romo said, even if they did charge Jaramillo initially, an aggravated fleeing charge is not considered violent.

"It’s very difficult to keep somebody in custody," Romo said. "Under our current pretrial detention rules, based on fourth-degree felony when there’s no injuries."

Romo said Jaramillo likely would not have been held in jail, even if she did try to hold her.

While Cibola County Sheriff Tony Mace would like to see more aggressive prosecution for stolen cars – and see fewer cases bounce back to his office after an arrest – he agreed with the district attorney.

"Even if the case wasn’t dismissed, because of the pretrial arrangements and the pretrial detention and all of that, she could have very well been back out on the street," Mace said.

As of Monday, Jaramillo has been recharged in the stolen bucket truck case. The sheriff’s office also said he’s been in contact with the district attorney’s office and plans to re-file charges on the initial stolen vehicle chase soon.