ALBUQUERQUE, N.M. – The driver of a white Ford Mustang involved in a school bus rollover crash has been charged with two counts of reckless driving.

Mario Perez, 49, was charged with two counts as two students required surgery for serious leg and pelvic injuries after being involved in the crash.

According to the criminal complaint, Perez was racing his white Mustang against a blue Mustang on westbound Gibson Boulevard SW – shortly after 5 p.m. Wednesday. At around the same time, a bus with 23 students on board crossed Gibson while traveling northbound on Messina Drive. Perez’s Mustang crashed into the passenger side of the bus, causing the bus to roll onto the driver’s side.

Police were told the driver of the blue Mustang did not stop and continued westbound on Gibson after the crash occurred. A witness estimated the two Mustangs hit around 110 mph in the area with a posted speed limit of 40 mph.

Seven students were transported to area hospitals where they were medically checked. Perez was transported to UNMH with a broken femur and required surgery. 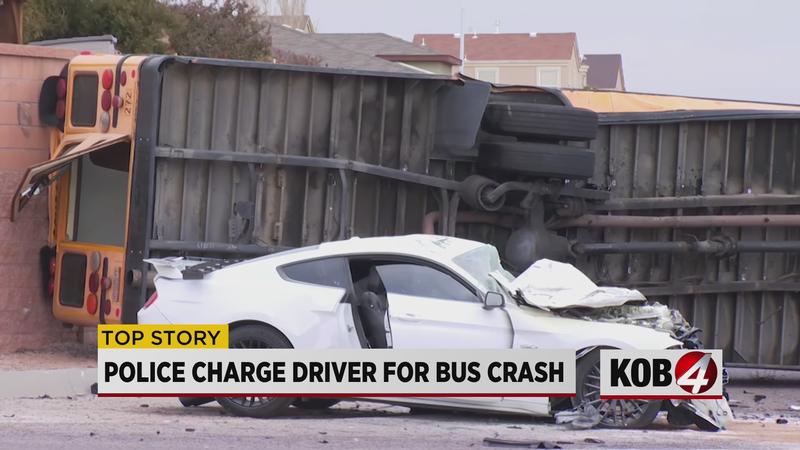 Officers did not find any signs of Perez being intoxicated.

Perez lives new the intersection where the crash happened.

“He’s not at fault. I mean, I heard differently and I heard the bus was at fault,” said a woman who identified herself as the wife of Perez.

She answered the door at an address listed in court documents for Perez.

KOB 4’s Kai Porter asked her if Perez had been involved in street racing in the past.

“No, he’s never done anything like that,” his wife said. “I mean, he’s a real – he knows the law, you know. He loves his car. But he’s never hurt anybody or anything. He’s always been really careful about everything.”

No further information is available at this time regarding the driver of the blue Mustang.

The school bus driver is still recovering from his injuries from the crash, according to APS.

"There is not another driver to assign to the route, so bus #272 will not run routes tomorrow," Monica Armenta, APS spokeswoman, said.

The Albuquerque Police Department announced the launch of an operation to crackdown on reckless drivers just hours before the crash occurred.