ALBUQUERQUE, N.M. — Juanita Hernandez has had about two dozen run-ins with law enforcement since 2008.

BCSO helicopter video shows some of her most reckless behavior last year, in real time. She actually flips off the helicopter before she leads law enforcement on a chase through Albuquerque.

The nearly 12-minute video shows a white SUV weaving through traffic, evading PIT maneuvers by police, and pulling into oncoming traffic. Eventually, authorities chase her down. She crashes into the median on I-25 and police arrest her on scene.

"This is just clearly somebody that was too high risk to be out in public," Bernalillo County District Attorney Raúl Torrez said.

Torrez’s office filed a pretrial detention motion in that case, but it was denied. 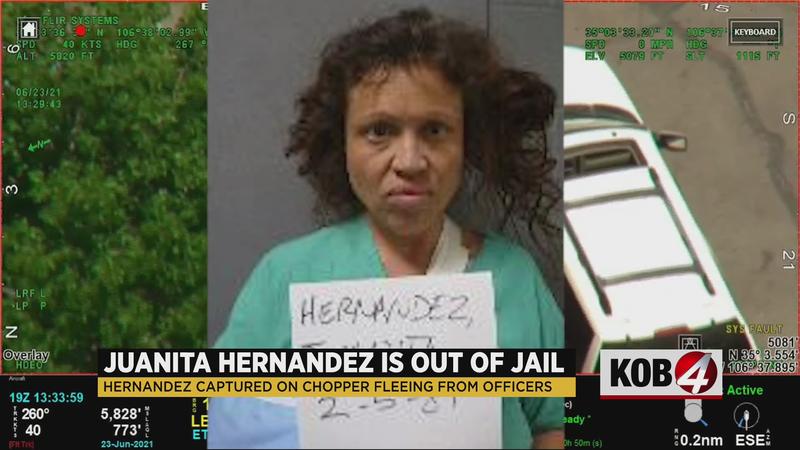 "It’s extremely frustrating and I will say the most important thing is that no one got hurt this time," Torrez said. "After the tragedy in Santa Fe last week, we now understand in graphic detail how extremely dangerous that particular crime can be. And even though it’s not categorized under New Mexico law as a serious violent offense, it is extraordinarily dangerous."

Hernandez’s criminal history shows this wasn’t her first time committing that type of crime, either. A month earlier, she was charged with the same crimes after she allegedly hit two law enforcement officers in Luna County with a vehicle.

This past Sunday, Hernandez committed the same type of crime for the third time. Investigators said three women said Hernandez threatened them with a knife. Officers found her near Central and Tingley, but she allegedly took off. There was a pursuit that ended on I-25 near Rio Bravo, when Hernandez ran off the road.

"My hope is that we don’t wait for another tragedy before we decide to pay attention to this again," Torrez said. "That we actually do the hard work now to do something so that another tragedy doesn’t happen to us."