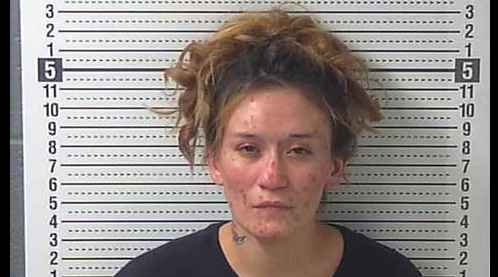 HOBBS, N.M. — A woman wanted for stealing and crashing a police vehicle, during a deadly shootout with an officer in February, has been captured.

Janessa Perez, 28, was found and arrested Friday afternoon by Hobbs police at a home on the 900 block of South Elm Street.

Police say a female was observed peeking out the door before quickly shutting it. Officers surrounded the home and confirmed with the homeowner that Perez was inside. Perez then emerged from the home and was taken into custody.

Perez faces seven total criminal charges, consisting of – one count each – failure to appear in court; unlawful taking of a motor vehicle; criminal damage to property; resisting, evading, or obstructing an officer; escape from custody; reckless driving; failure to give immediate notice of an accident.

The charges stem from a Feb. 23 shootout between Hobbs police and Daniel Ramirez, 27, which began as a vehicle assist call for a pickup truck stalled at the entrance of a gas station in the 1800 block of North Turner Avenue.

During the call, an officer approached the pickup occupied by Ramirez and Perez. Court records state that when Ramirez was ordered to exit the pickup, he ran from the officer. This led to a foot pursuit and ensuing shootout where the officer was shot in his left thigh and Ramirez was shot in the chest.

Police handcuffed Perez and began tending to Ramirez, which is when Perez reportedly slipped out of her handcuffs and stole an unlocked patrol vehicle. Perez allegedly crashed the vehicle in a nearby banking parking lot before fleeing the scene on foot.

The wounded officer survived but Ramirez later died from his wounds.

Police say Perez is currently being held at a Hobbs jail while awaiting arraignment.