ALBUQUERQUE, N.M.- A dog found itself between a rock and a hard place Sunday.

Jax’s owner, Miranda Van Dijk, said the one-and-half-year-old Labrador-mix, slipped on a boulder when they took a break from their walk.

"Jax decided to try and get from the lower boulder to the top boulder," Van Dijk said. "But, because it was snowy, he slipped off and fell into the crack between the two."

Temperatures were well below freezing, and Jax was in trouble.

"Hearing my dog in pain was so painful," Van Dijk said. 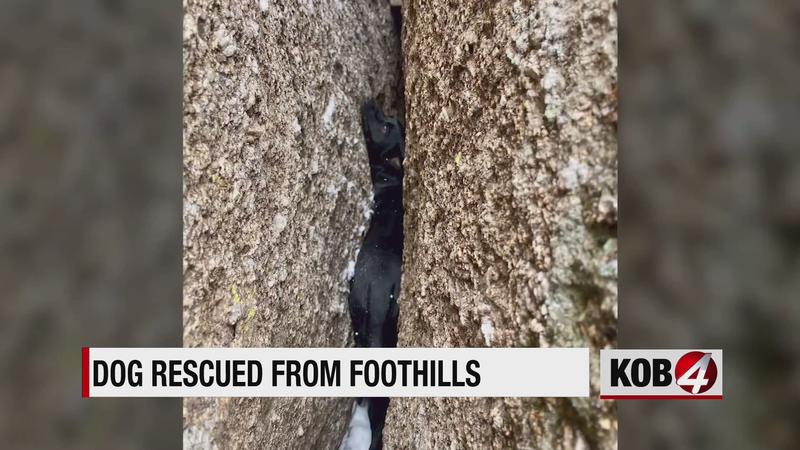 "Everybody I work with at the station has dogs," said APD Lt. Korpan. "And they were pretty moved, and we were working pretty hard and diligently to get him out."

It took three hours, in freezing cold temperatures, to reach Jax, who was stuck 10 feet down a crevasse.

"We moved the dog a little bit and kind of reassess and moved the dog more and reassess," Korpan said. "Finally, the dog was free enough to where one of the guys could reach his hand and just grab the dog and pull him out."

Van Dijk said she was overwhlemed with emotions when her dog was freed.

"I felt like was just going to sit down there and not be able to move," she said. "I just wanted to hold on to him for a bit and reassure him and just – you know – make it clear he was safe now."

Thanks to the help of AFR, Van Dijk said Jax only suffered a few scrapes.

"It was really clear, when they were there, that a lot of them owned dogs, they cared about dogs," she said. "They were like talking to him and being kind and talking to me and making sure that everyone in the situation felt really safe. So, I just so much appreciated it."