MOUNTAINAIR, N.M. — Torrance County deputies tried to pull over a woman speeding through an elementary school zone Wednesday afternoon, but the situation escalated.

A criminal complaint says a deputy went after the driver, who they identify as Shelley Griego, but stopped when she sped into a nearby neighborhood.

Minutes later, the deputies learned she was causing another issue outside of Mountainair Elementary School.

"We were about three cars back in the pickup line,” said Victor Romero, whose 4-year-old son goes to the school. “We saw a car honking, and all of a sudden we saw the situation escalating. The car drove up to another car, started pushing on it."

Griego was behind the wheel of a sedan, ramming a white truck that had just picked up a child from school.

Romero says the truck backed up out of the way, and Griego swung around in the intersection to try to go in for another hit. She hit a stop sign and guardrail instead.

Meanwhile, Romero was making a move to stop her.

"I happened to see one of my dad’s workers driving by in a pickup truck that I knew,” said Romero. “I got in the truck and backed it into the back of her car, pinning it so that she couldn’t drive off no more."

Deputies approached with guns drawn, and took Griego into custody. She is charged with felony fleeing a law enforcement officer, and resisting an officer. 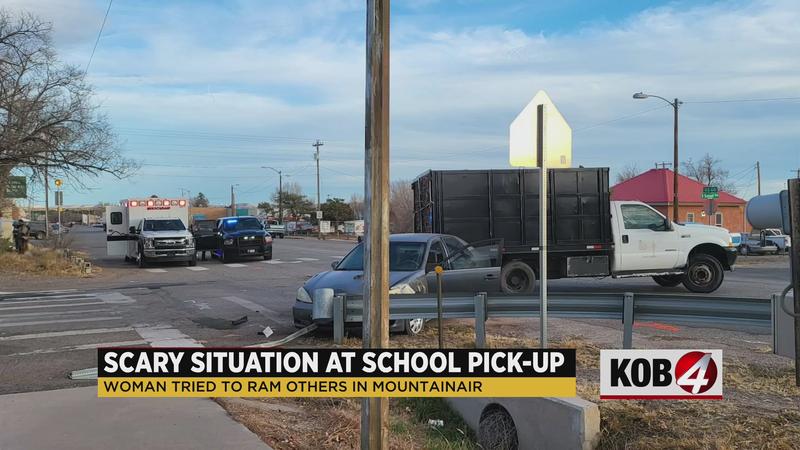 "I am extremely blessed to be in a community and have the staff that I have, the parents that we have and the community members that stopped to lend help or aid in the situation without even knowing what the situation is,” said Dawn Apodaca, the superintendent of Mountainair Public Schools.

Apodaca said this isn’t the first time the school district has had issues with Griego. She reportedly seriously threatened Apodaca and another administrator back in 2018-19. There’s been a permanent district-wide no trespass order on file for her since then.