Woman sees burglar leaving home with more than $3,000 worth of electronics

ALBUQUERQUE, N.M. — Home and business owners are sharing videos of break-ins, vandalism and their property getting stolen – but APD reported that property crime is at a four-year low.

One woman, who wants to remain anonymous, said she is extra frustrated because her house was broken into while she was out of town. Without her Ring camera she wouldn’t have known until she got back.

The man in the video took her new bike and nearly $3,000 worth of electronics. She said the most frustrating part is that she took multiple precautions before she left.

“I knew my house was locked up prior to leaving – the front door, the door going into my garage, the garage door, back door, doggy door, all locked prior to leaving and he somehow jimmied his way into the doggy door from what I know,” she explained. 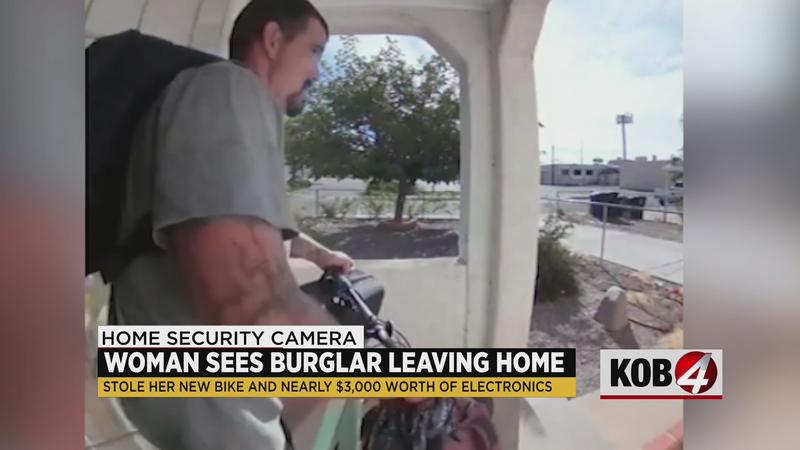 She was able to get ahold of her sister who took the initial inventory of what was missing, then called police. However, the burglar was able to slip under their noses again.

“They were all in the front yard waiting for police to show up and he came through the back doggy door, left with more electronics, my soundbar and other things, and walked out the back door and left it unlocked. When the police walked through, my sister noticed more things were missing,” she said.

The man was last seen riding the stolen bike near Gibson and San Mateo.

She is missing multiple electronics, but the items she wants back the most are more sentimental and were given to her when her grandfather recently passed away.

It’s not just homes that have been broken into in the last few days, businesses in Old Town caught a thief on camera Friday morning.

Fat T’s BBQ owner Tylor Torres said he was trying to get his day started when he noticed a few things missing, then he checked out their security video.

“Today I came in and went to get my dolly out and I was like, wait, it’s not here, looking everywhere, so we go to the cameras, check it out, sure enough, 7 a.m. this morning a guy came in scoping out the area, jimmied in the door somehow and pulled the dolly out like it was nothing and rode away with it,” Torres said.

Torres says this isn’t the first time they have been broken into since they opened this year. While a dolly might not seem like much, multiple break-ins add up.

“It’s tough as a tenant to add these costs to your price, just to operate, when it’s hard enough to operate without people stealing your stuff and having to pay for security, all these added fees,” Torres said.

Upstairs from Fat T’s the property manager, Pete Kassetas said his tenants have been reporting more crimes like what Torres saw Friday.

“I’ve noticed a huge uptick in the property-related crime that are affecting the business owners in the plaza and of course myself it’s been for whatever reason has been challenging for the business community,” Plaza Don Luis Property Manager Pete Kassetas said.