ALBUQUERQUE, N.M.- Many different kinds of sports teams are playing again in New Mexico, but, under the Public Health Order, youth sports are still sidelined.

College and other school sports are back on the state’s courts and fields with specific COVID safety protocols to follow. Plus, with courts and fields able to open back up, anyone can go out and casually play.

So organized youth sports are left wondering why they’re left out.

“It’s been heartbreaking to be honest with you,” said Bryan Benavidez, who coaches Metro USSSA 12-and-under and 13-and-under baseball teams.

This time of year, they’d usually be looking forward to a game on Saturday. 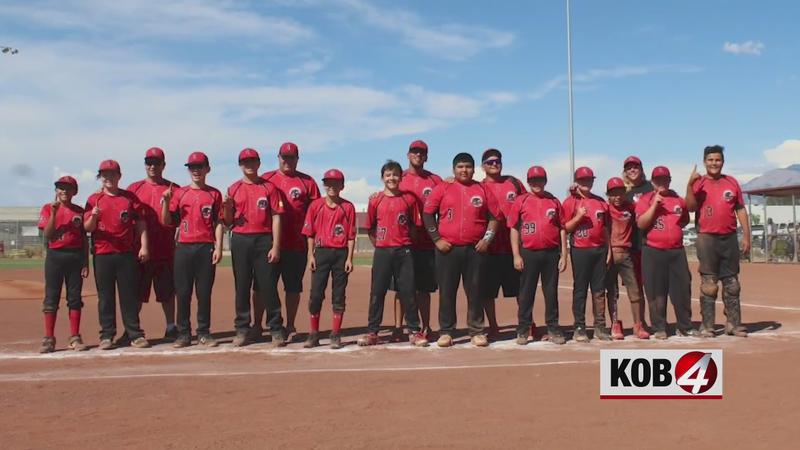 Instead, they’ve been practicing in small groups, as they prepare to head back to school in-person at Albuquerque Public Schools.

“It’s horrible. We see that they’re allowed to go 22 per classroom — and that’s a small room, and the same amount of kids on an acre of a baseball field, they’re not allowed to play,” Benavidez said.

They’re so desperate to play, they’re thinking about traveling to Texas to play in a few weeks.

“If we’re not going to get it here, we have to find it somewhere else,” Benavidez said.

The team knows all about the protocols high school baseball teams have to follow.

“We’re able to do these things that they’re requiring. We’re already doing them, and we’re going above and beyond that,” Benavidez said.

He says missing out on playing has affected the players’ mental health.

“They were a lot happier then. Now, they’re slower, there’s more attitude at practice,” he said.

“Yes, I have been very sad,” 12-year-old Aidan Sage said. “It just sucks to see other people play. I just want to get back on the field.”

“Like, you’re missing out on what you get to do, what your dream is,” 10-year-old Alex Lowrie said.

“It’s made me very sad that I can’t play,” 12-year-old Aaden Benavidez said. “It’s been kind of boring. I can’t look forward to anything after school or anything like that.”

A spokesperson for the governor’s office sent KOB 4 this statement.

“We want New Mexicans to be able to resume the activities and events we enjoy when the infrastructure to do so safely is feasible and in place. The state is always reviewing the public health policies to ensure consistent and comprehensive guidelines, particularly as elements of the pandemic are constantly changing. Additional activities require additional guidelines and safety practices to be both established and strictly adhered to, the potential for which the state is continually examining.”

So, for now, Metro youth teams will keep waiting.