4 Investigates: What would an abortion amendment say?

ALBUQUERQUE, N.M. – A proposal by Republican candidate Mark Ronchetti to put abortion “on a statewide ballot so everyone gets a say” is the latest way reproductive rights and the U.S. Supreme Court decision overturning Roe v. Wade have defined New Mexico’s race for governor.

In a recent ad, Ronchetti says he is pro-life and says voters should decide on the issue in a special election.

“No politician should decide this,” Ronchetti says in the ad, seated next to his wife, Krysty. “You should. We should vote on it as a state.”

Ronchetti acknowledged Tuesday that the Democratically-controlled Legislature would do the heavy lifting on any proposed constitutional amendment. In New Mexico, each chamber of the Legislature must approve a proposed amendment. If that happens, the amendment sails past the governor and onto the ballot. Short of a constitutional convention, that’s the only way to amend the state constitution.

Ronchetti has proposed a special election, something the Legislature also controls. Such an election often features only a few ballot questions; sometimes just a single one. Special elections often have lower turnouts than general elections. Historically, low-turnout elections favor Republicans. 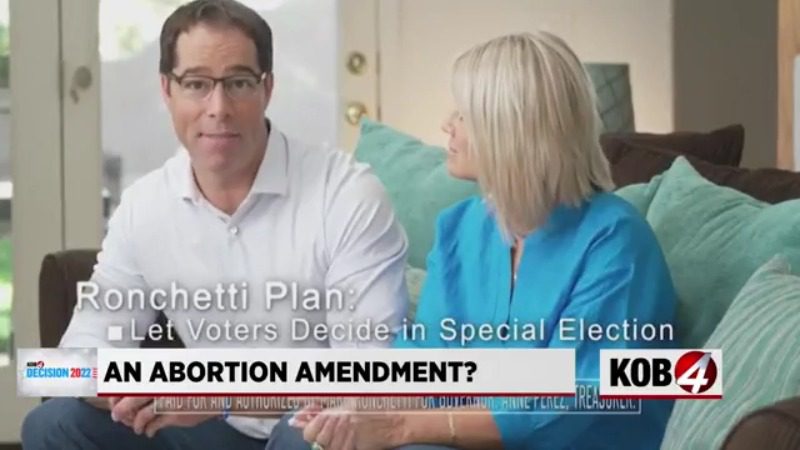 “What I would say to legislators across the board is we owe New Mexicans a clear choice to be able to figure out the path we want to take forward,” Ronchetti told 4 Investigates Tuesday.

He did not offer proposed language for such an amendment.

“What does that totally look like? I don’t know yet,” he said. “I’m not 100% sure what it looks like yet. Yes, we’ll have a voice in the respect that we’d like to be able to say, ‘Hey let’s let everybody have their say in this thing. But there’s no doubt this is a little bit of uncharted territory.”

Democrats, including Gov. Michelle Lujan Grisham, have pounced on Ronchetti for a lack of specific language. At a news conference Tuesday, it was clear that the state party expects something akin to a ban.

Lila Nezar, a third-year population health student at UNM, said a ban on abortion would have far-reaching implications.

“In New Mexico, if abortion was to be illegal, an unplanned pregnancy has the ability to take me out of school, to make me rescind my application for grad school, to become the defining factor in whether I will be able to pay my rent next month or become evicted,” she said.

“I think whenever you open the door and you have opportunities that take away the rights of women and their families, and health care workers, I think it’s a dangerous slope that we don’t want to go into.”

“Gov. Lujan Grisham has made it clear that she will continue to advance reproductive access in New Mexico, including supporting codifying abortion protections,” said a campaign spokeswoman. “Right now, abortion rights are protected in New Mexico because of the action Gov. Lujan Grisham took to overturn an antiquated law on the books criminalizing abortion, ensuring every single New Mexican’s right to make their own personal health care decisions with their doctor.”