ALBUQUERQUE, N.M. – On Tuesday night, Albuquerque city officials held a public safety town hall in the northeast part of town asking residents for their solutions to the problems we see across the metro every day.

Earlier in the summer the city held a similar town hall on the West Side. While this town hall had a much smaller turn out the structure of the meetings were basically the same. City officials and various leaders were asking neighbors to come up with unique solutions to the cities’ problems. But once again the problems being discussed are not necessarily the problems at the front of these neighbors minds.

The three topics being discussed in detail Tuesday were homelessness, property crime, and auto theft.

“Public safety is a huge concern for all of our communities in the city and we appreciate all of you taking the time to come together with solutions and ideas and see perspectives be heard.”

Multiple panelist from various city departments led discussions on each one of these topics. KOB 4 sat in on the discussion on homelessness where many neighbors brought up their concerns. 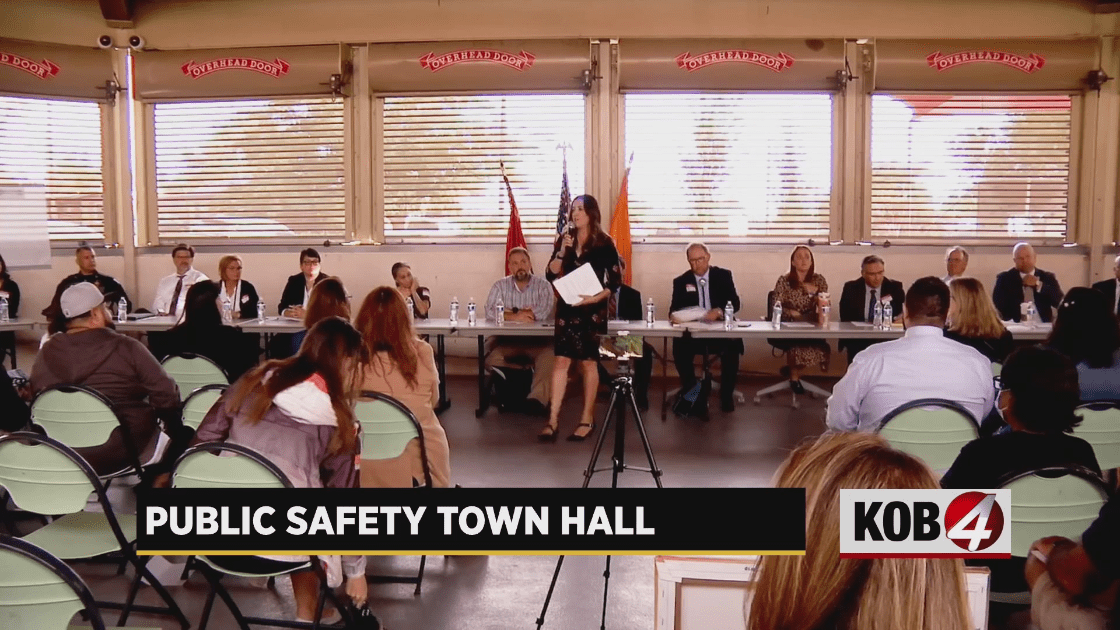 “When there is money available why is it a building built or the money going to something else instead of homelessness,” one neighbor asked.

“Can we get better data what is the data for example in Denver Tucson or other places to see how they handle homeless,” another one added.

There were even some heated exchanges, but moderators tried to keep the discussion on track.

Through these conversations a few neighbors did offer up possible solutions.

“There are success stories out there of people who are unhoused and are now housed. I’m sure Jody at Heading Home has a few, why not invest in them? Give them the training to help?” a neighbor suggested.

While homelessness was a hot topic, one group was disappointed that they didn’t get to talk about a topic they feel is a huge problem in the community –gun violence.

This group of moms attended the town hall to talk to leaders and ask them why they didn’t pass more crime focused bills during the last legislative session.

But these elected officials were not taking questions and violent crimes were not even a topic up for discussion at Tuesday night’s town hall about crime.

“It’s so disappointing because you know our children’s voices are not heard I brought all these mothers who recently lost their children and we are screaming at the top of our lungs for this problem to end and it’s sad we have to sit in silence,” said Alicia Otero a mother of murder victim.

Otero adds she would like to see more crime bills not only be introduced in the upcoming session but to also have them pass.