ALBUQUERQUE, N.M. – Video shows a frightening attack on an Albuquerque mother at a local Blake’s Lotaburger.

Now, we’re hearing from the woman who says she was the one who the man beat up. She asked to remain anonymous, but wanted to share her story of what happened.

Security camera footage shows the Albuquerque woman, minding her own business, when a customer walks up to her and starts punching. 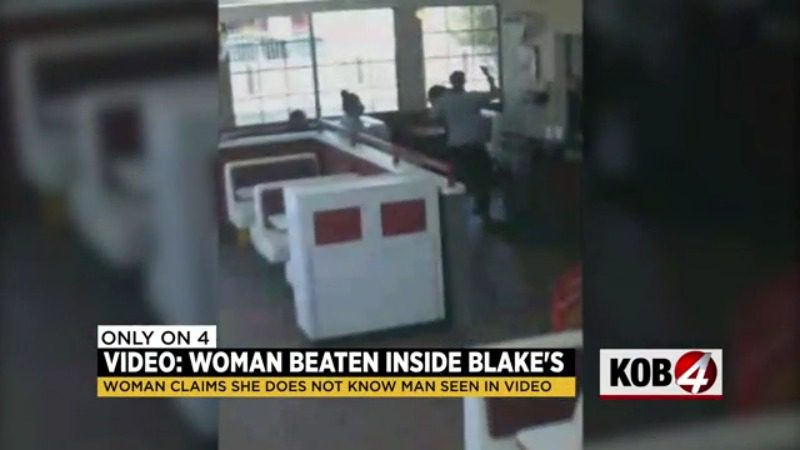 She spoke with KOB 4 about what she says happened at the Blake’s Lotaburger on 4th Street and Candelaria earlier this month.

“My fiancé, he asked me to drop by Lotaburger to get some food for him and the kids,” she explained.

While waiting to get help from a worker, she says a man started complaining about his order being wrong.

“He got upset and was just cursing at her, disrespecting her.”

She asked him to stop when he started verbally attacking her too.

“Then he called me names and started calling me bad words.”

After eating his food, he makes a call and that’s where the video starts.

“He just cocked back his fist and started coming towards me and I was off guard.”

He started hitting her multiple times in the face and body, pushing her back to a booth.

“It was just horrible because I just didn’t expect it. It kind of came out of nowhere.”

She tried to fight back.

“I just had my wallet and my keys around my wrist, and that’s pretty much what I used as a weapon.”

The suspect then takes off, leaving the woman with several bruises.

“I got a couple knots in my head. He cut my finger. My chest was sore, my arms were sore. I had a really big bruise on my arm.”

This random attack left her shaken.

She said she knows it could have been worse.

But it doesn’t make it any easier.

The suspect seen in the video is still on the run. Albuquerque police say they are investigating this case and are trying to locate the person.

If you have any information, reach out to police at 242-COPS.