ALBUQUERQUE, N.M. – Parents on the West Side are upset with the City of Albuquerque for not cleaning up the pedestrian bridge that they use to walk their children to school.

One of the more disturbing objects left on the bridge is a cup of urine that has been out there for over a week even after getting reported to 311.

On Monday, the parents had to once again walk past that cup on their way to school. Now this may seem like a small issue to some people, but one mom says she has done everything in her power to try to get the city to do their job and come clean it up.

As mentioned, this cup is a biohazard as it is filled with human waste. The mother we spoke to says she followed the steps that the city suggests, she opened her 311 app, clicked file a report, took a picture and sent it off to the city.

“I explained what I see every day I usually put pictures and sometime I will go back and acknowledge if a neighbor has written something. I’ll say ‘yeah it’s still there it’s like this and it’s been like this for weeks now,’” she told KOB 4 last Wednesday. 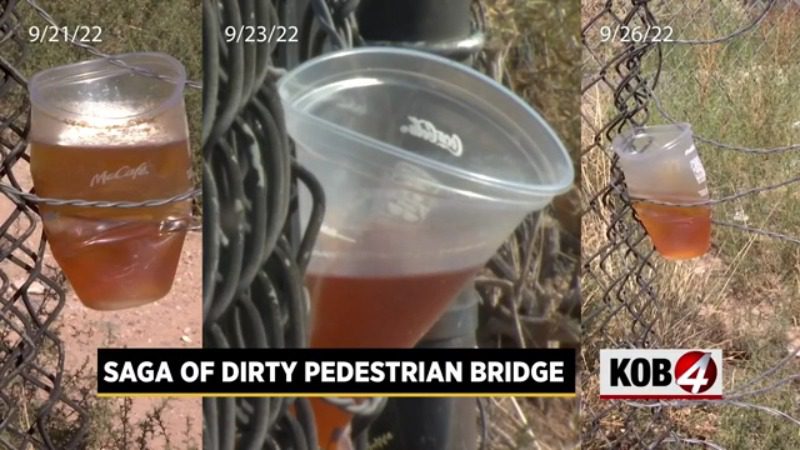 Then on Thursday night, she says she got a notification, saying the “Issue has been resolved.” But when she walked her daughter to school on Friday, it was still there.

“It’s just disgusting it’s embarrassing it’s ridiculous that it has to come to this,” she added Friday. “We are reporting it, we are calling on it, we are trying to get it done and it’s just not happening.”

On Monday, when she walked by the cup of urine yet again the frustration grew even more.

She told us she’s not surprised the city has already hit the 100th homicide for the year, saying how can we expect the city to handle crime when it can’t even respond to cleanup requests like this.

Even KOB 4 had trouble getting answers from the city. We’ve asked to speak to someone from the City Solid Waste Department on camera every time we have covered this story to ensure that your 311 reports are being heard, and each time the department has declined to do an interview — instead opting to only give a statement.

On Monday, KOB 4 asked what is causing the delay in cleaning up the bridge?

The Solid Waste Management Department said in yet another statement:

“The cleaning hasn’t been delayed and it is still scheduled by the Solid Waste Management Department (SWMD) for a crew to go out there.”

After getting that sent over through an email we followed up with the question, “What day will the department clean up the bridge?”

They eventually replied saying they can’t say what specific day, but it will be cleaned sometime this week.