ALBUQUERQUE, N.M. – We’ve all dealt with door-to-door sales people who won’t take no for an answer, but one Albuquerque family says a man posing as a solar panel salesman took things a step further, reportedly pulling a gun on them right in their driveway.

The family says there were multiple red flags from the get go. From how this salesman was dressed – to not even having a business card. So, when the salesman approached D.J. Reeves, he told the man they weren’t interested and to get off his property. But, that’s when things started to get out of hand.

On Saturday morning neighbors near Wyoming and Montgomery were taking cover as a man who said he was selling solar panels pulled a gun from his car after being told to leave.

“He kept going to different houses, he didn’t have a certain order to him at all,” Reeves said.

Even before a gun was pulled, folks in this neighborhood were suspicious if the man even had anything to sell. 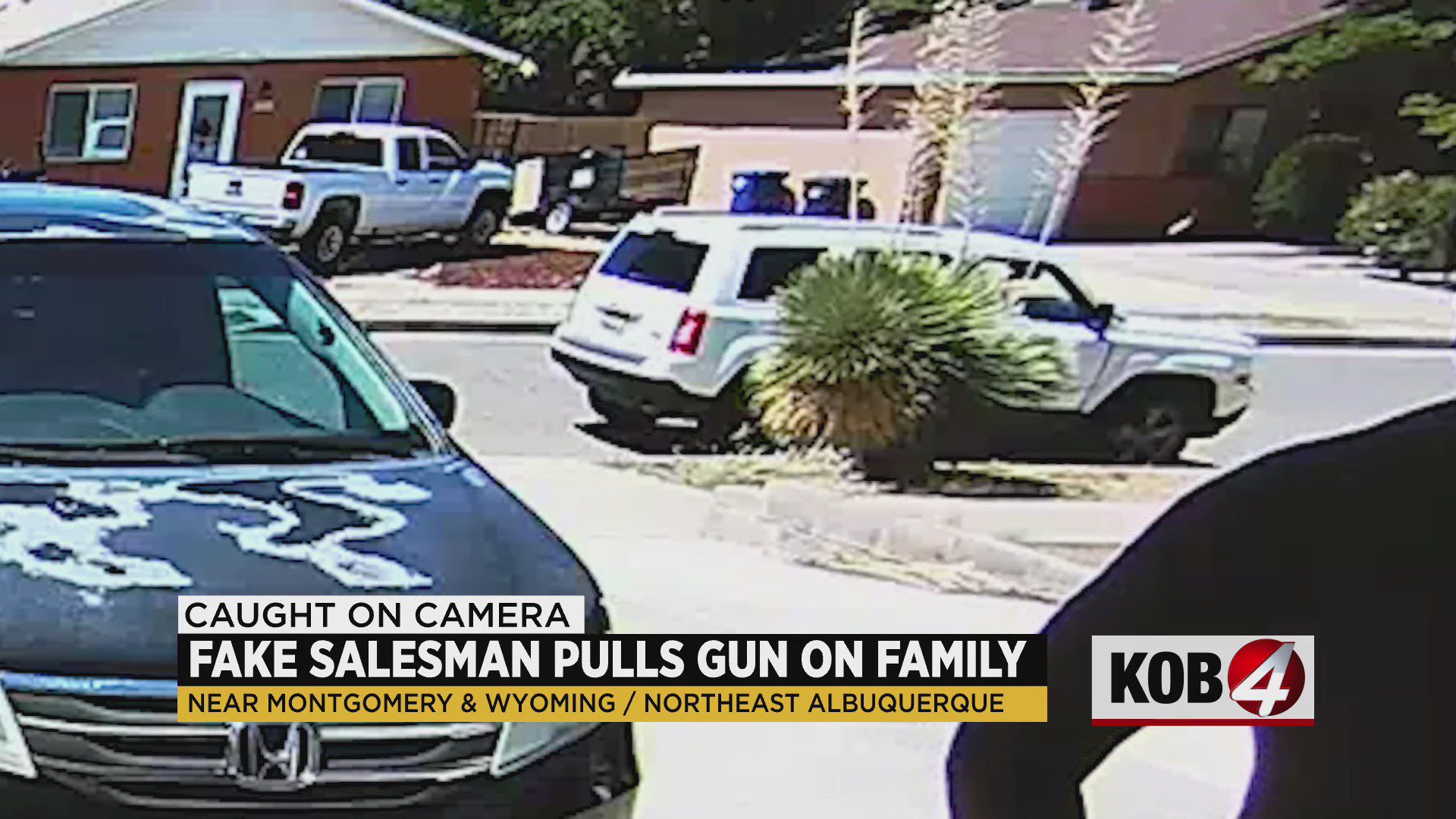 “What it seemed to me what he was doing to me sir was casing houses. Because he didn’t have any uniform, his wife beater was dirty, sports shorts, dirty shoes, no ID of any kind – that all raises red flags,” Reeves said.

D.J. Reeves overheard his neighbor across the street ask the man for a business card, but he was told he didn’t have any. So when the salesman came over to Reeves’s house, he didn’t give this man the chance to make his sales pitch when he walked onto his driveway.

“He said he’s with ‘blah blah blah’ solar company, and I told him I heard you don’t have a card I don’t see any pamphlets, you’re not wearing a uniform, so I’m going to ask you to stay off my property,” Reeves said.

“For about 10 minutes, he just kept posturing, swearing, calling me every derogatory thing he could,” Reeves said.

And Reeves caught it all on camera.

“We got outside cameras, we got motion sensors, we have, of course, have signs saying private property,” Reeves pointed out as he pulled up the footage., “Now, if you look at the video, it doesn’t take long to see that something ain’t right.”

After arguing for over 10 minutes, the salesman storms off saying he will come back with back up. A few minutes later, a white Jeep pulls in front of Reeves’s house and the salesman came out with a gun, waved it in the air and drove off.

“I’ve never met a salesperson who needed to be that aggressive or needed a firearm to make a sale,” Reeves said.

So Reeves called 911 and filed a report with APD. Reeves says he gave police descriptions of the man, the car, the license plate number, and even where he thinks the salesman lives.

Reeves said he hasn’t decided if he wants to press charges but he does want to make sure his neighbors are aware of what happened and to warn them to be careful.