RIO RANCHO, N.M. — A local high school is offering a reward for those with information on the vandalism and damage done to their campus over the weekend.

Around 4 p.m. Sunday, the high school began sending a message to students, staff, and administration, notifying them that the campus incurred “significant vandalism and damage.”

Graffiti was spray-painted on a wall near the football field and reportedly on other structures that had just been installed.

The district is offering a $500 reward for information leading to the arrest of the offenders. If you have any information, reach out to Cleveland High School security or the Rio Rancho Police Department. 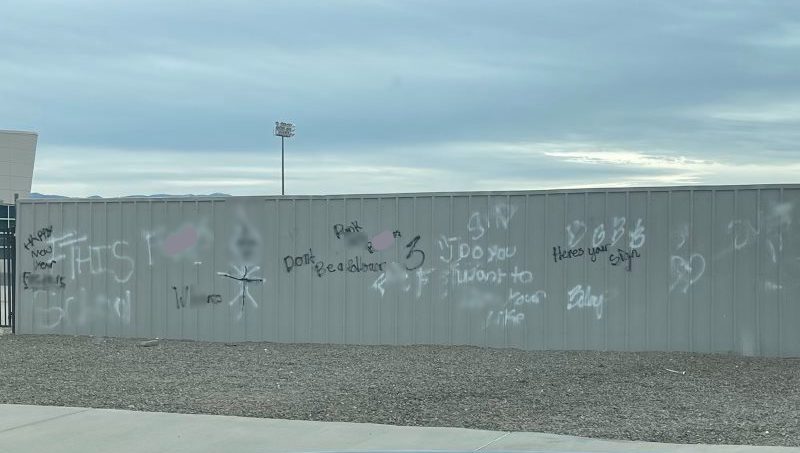 “Over the winter break, V Sue Cleveland High School was vandalized on two occasions. Last week, rocks were thrown at the school atrium breaking two windows.  No entry was made into the school. It was reported to law enforcement and they responded.

In addition, earlier this week, graffiti was spray painted on some fences, parking lot and sidewalks. We will work cooperatively with law enforcement to assist in identifying the vandals involved in the incident.

Vandalism incidents of this nature are disruptive and result in countless hours of work. If anyone has any information on this incident, please reach out to Rio Rancho Public Schools or the Rio Rancho Police Department.”

This isn’t the first time Rio Rancho Public Schools has had to deal with a break-in during winter break. Rio Rancho High School was broken into overnight Monday, Dec. 26. Officials shared the following statement:

“The gym at Rio Rancho High School was broken in to at some point between late Monday evening and early Tuesday morning. Nothing has been stolen and no damage was made to the school. The Rio Rancho Police Department was notified and responded.”